D A C B is my placing in this fine class of 5-year-old Jersey cows. D sorts herself to the top because she has the best rear udder in the class. D uses that distinct edge in rear udder to place over A in my top pair. D is fuller and wider in her rear udder than A. Additionally, D is considerably stronger in her front end and she has more depth of fore rib, depth to her barrel and depth of rear rib than A. However, A keeps this a close placing as she wears her udder higher above the hock and has her fore udder blending more smoothly into the body wall.

In my middle pair, A places over C for that decided advantage in fore udder. She is much snugger in her fore udder attachment. A also shows a more balanced blending of parts, being fuller in her crops, stronger in her loin and more level from hips to pins because of the high pins on C. Additionally, A is deeper throughout her frame, especially in her flank and rear rib. On the other hand, I admit C is a sharper, more angular cow than A.

Finally, in a more logical final placing, C gets the nod over B for her udder. C has so much more height and width throughout a more capacious rear udder. She also shows more strength to her udder cleft and a more ideal apparent udder texture than B. C is a much longer, open-framed cow that is more stylish and angular throughout, being especially longer and leaner in her neck, more prominent about her hooks, pins, and thurls, and more incurving in her thighs. Although I recognize B is a bit more level in her rump, remembering the high pins on C, I feel justified in leaving B last because she lacks the strength to her udder cleft and width to the top of her rear udder to earn a higher placing. 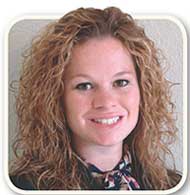 Molly Sloan
Columbus, Wis.
Sloan placed the JERSEYS. Sloan placed the JERSEYS. She grew up on her family's registered Holstein farm in Marengo, Ill. Sloan graduated from the University of Wisconsin-Madison where she was on a dairy cattle judging team that won three contests, including World Dairy Expo. In all three contests, she was high individual in reasons. For the past eight years, Sloan has worked for Alta Genetics, traveling across the U.S. and 13 additional countries. She presently serves as global training programs manager. To date, she has judged 60 local, state and national shows in 11 states and three countries. In 2013, she served on the All-American panel for Holsteins.
SCORING KEY