Fill up the gas tank, harvest later: the new school of thought on alfalfa First in a two-part seriesAlfalfa growers have heard the downside of harvesting alfalfa too late. After plants have initiated regrowth, there’s a legitimate case for earlier cutting. Alfalfa requires energy in the form of root carbohydrates for growth. It is a very energy-intensive process, drawing on root energy reserves for initial growth, often until the plant reaches about the fifth trifoliate. In this first of two articles, we’ll discuss the case for a slightly later alfalfa harvest with HarvXtra® alfalfa with Roundup Ready® Technology.As alfalfa stewards, we need to ensure we maximize our root reserves to increase persistence, winter survivability, competitive ability, and overall stand health. A common practice in conventional alfalfa has been to harvest at frequent intervals in-season, typically every 23 to 28 days, depending on your location. This can be taxing on plants, preventing their ability to “fill up their gas tank” completely before being harvested again. This can be dangerous in northern regions, particularly later in the season if we don’t allow the plants to store enough root reserves prior to the first killing frost. And harvesting frequently decreases plant persistence, limiting the number of productive stand years.HarvXtra® Alfalfa has introduced the opportunity of extending harvest to maximize alfalfa yields. One factor preventing alfalfa from being more competitive with other crops like corn is the fact that it is generally lower yielding per acre. The ability to extend our harvest intervals can improve our ability to capture the maximum yields per acre, since alfalfa accumulates about 100-125 pounds of dry matter per acre (can vary by region) per day. If we extend harvest by five or even 10 days, we expect to see an additional 500 to 1,000 pounds per acre, a significant advantage.Once alfalfa reaches the reproductive phase, it will begin growth from new crown buds near the soil surface. Harvesting on a delayed schedule, after bloom is present, means that new growth is going to be harvested off too. But that’s not all bad news.Yes, we are removing some of that new growth, causing plants to have to initiate new regrowth from other crown buds. This will require use of some of those energy reserves. However, this does not consider that, during those delayed days of harvest, plants are storing up more energy reserves. This means that the plant’s “gas tank” is getting filled. Now we are harvesting a plant with a full gas tank, which is then better able to initiate that new regrowth from crown buds post-harvest. When we compare that to alfalfa harvested on a shorter schedule, the plant hasn’t had enough time to fill its gas tank. We are actually are a little ahead with our extended cut plants because those plants have more energy reserves to draw from. 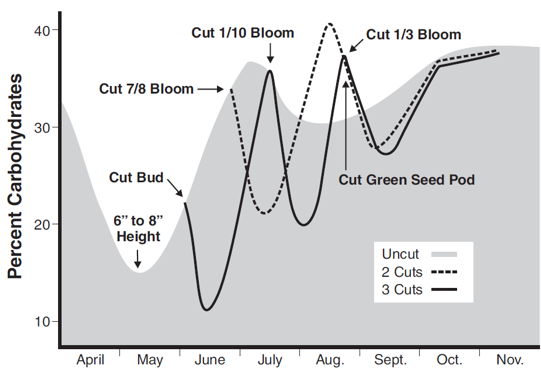 Figure 1. Impacts of elimination of an entire cutting on alfalfa root reserves, which would have similar impacts to delaying harvest and maintaining the same number of cuttings per season. By eliminating a cutting and/or extending harvest interval to a later maturity, we are allowing the plant the ability to store more root reserves, potentially improving plant health and resilience. Photo source: NDSU Extension.

To learn how you can widen your cutting window with HarvXtra® Alfalfa with Roundup Ready® Technology from NEXGROW alfalfa, visit PlantNexGrow.com. We’ll continue this discussion in a second article as we further explore how this method impacts quality, persistence and winterkill.

NEXGROW® alfalfa varieties are for dairy and beef farmers and commercial hay producers who are always looking for next-generation advances in high-yielding and high-quality alfalfa varieties. Few companies offer a broader portfolio of HarvXtra, Roundup Ready and conventional alfalfas than NEXGROW, and we can help you navigate the many considerations to determine what’s best for your farm. Our HarvXtra Alfalfa with Roundup Ready Technology varieties offer growers extra flexibility when it comes to cutting without sacrificing forage quality or yield potential. With a more flexible cutting window, growers are in charge of their harvest schedules. Roundup Ready Technology alfalfa also delivers unsurpassed weed control and crop safety in the field.