The top two cows of the International Guernsey Show both defended their titles from last year. 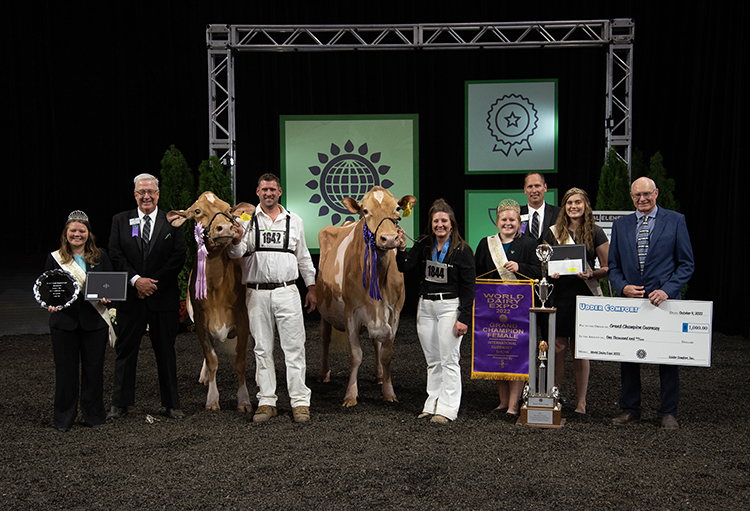 One hundred and ninety-seven Guernseys paraded through the World Dairy Expo showring on Tuesday, and at the end of the day, Valley Gem Atlas Malt-ET conquered the black shavings just as she did the purple shavings last year and the green shavings the Expo before. The winning Six-Year-Old and Older Cow was first tapped as Senior Champion, then Judge Phillip Topp and associate Tim Abbott named her Grand Champion of the International Guernsey Show.

Malt’s first Grand Champion victory for her breeders and owners, Valley Gem Farms of Cumberland, Wis., came as a Four-Year-Old in 2019. The pandemic canceled the possibility of a Five-Year-Old campaign at Expo, but she defended her title last year at 6 years old and now has repeated at 7 years old and fresh nearly a year. She also earned the awards for Best Udder and Best Bred and Owned of the show. 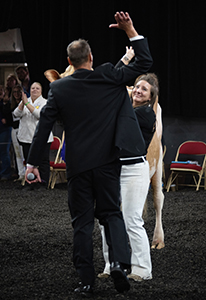 However, Malt was not the only familiar face in the center of the ring. Reserve Grand Champion went to Springhill Kojack Uno-ETV, who also claimed that title last year as a Five-Year-Old. This year, the cow owned by Ty and Ean Mader and Faith Ling of Springfield, Mo., competed in the same class as Malt, and Judge Topp praised the pair in class and while selecting Senior and Grand Champions.

“It’s hard to split these old cows up,” said Topp, of Botkins, Ohio, as he named his Grand Champions. He gave Malt the advantage in having a little more quality to her fore udder and tracking a bit freer on her rear legs.

While the older cows earned the top titles of the show, some of the youngest competitors for Intermediate Champion took home those honors. Champion went to the Junior Two-Year-Old, Heritage Brook Lb Trillium-ET, exhibited by Springhill and Elmhurst from Big Prairie, Ohio. Reserve Intermediate Champion was the winning Senior Two-Year-Old owned by Knapp Guernseys, Adam Fraley, and Frank and Diane Borba from Epworth, Iowa. She is Knapps Copper Tambi Wiz.

Winning the Junior Show was a cow that Judge Topp admired for her dairy strength and beautiful udder. “When this 5-year-old came in, we knew it was a slam dunk,” he said of Hi Guern View Asias Africa, bred and owned by Alaina Dinderman from Orangeville, Ill. The Reserve Senior and Reserve Grand Champion was the Four-Year-Old, Valley Gem Hit It Devora, owned by Hannah Hurst, Brynn Grewe, and Kyle Polk of Waynesville, Ohio.