I placed this class of Ayrshire aged cows D B A C. With her angularity and her stretch from end to end, D easily wins the class. For the top placing, D goes over B because D is sharper throughout. D is much longer in the neck, sharper at the withers, and especially more incurving in the thighs than B. Also, D has more length of udder and bloom of udder than B, which results in D having a more milky appearance than B. Yes, B has less set to the rear legs, has less quartering to the udder floor, and is deeper bodied than D.

For the middle placing, B gets the nod over A with a decided advantage to the udder. B has more bloom to the udder, less tilt to the udder floor, more distance between the teats (front to rear), and more width to the rear udder attachment than A. Furthermore, B has more depth of barrel than A. Granted, A is longer and leaner in the neck and is more incurving in the thigh than B.

A goes over C for the final placing because A has a major advantage in the rear feet and legs. A has rear legs placed more squarely beneath the rump structure, has less set to the hocks, is cleaner-boned about the hocks, and has a steeper foot angle than C. Also, A blends more smoothly through the shoulder than C. There is no doubt that C is cleaner-cut from end to end and has more bloom to the udder than A. C places on the bottom of the class because she has rear legs positioned too far back and has too much set to the hocks to place higher. 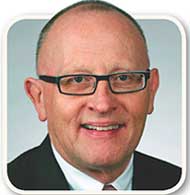 Les Hansen
St. Paul, Minn.
Hansen placed the AYRSHIRES. He is a distinguished teaching professor of dairy science and serves as the lead coach of the University of Minnesota dairy cattle judging teams. In the past decade, his teams have placed in the top five 8 out of 10 times at the National Intercollegiate Dairy Cattle Judging Contest, a record unmatched by other schools. Hansen's teams have won reasons in nine collegiate contests over just the past four years. Hansen is the longtime adviser of the Gopher Dairy Club, has been an academic adviser for hundreds of dairy students and is an internationally known researcher of dairy cattle genetics.
SCORING KEY