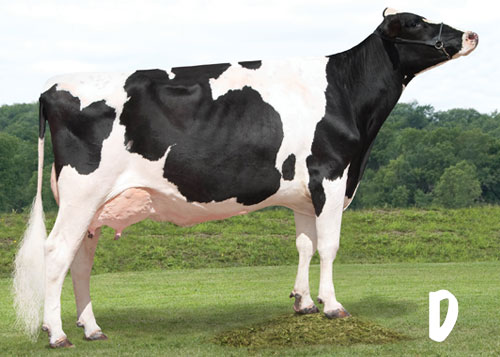 I place this fine class of Holstein cows D B A C. I started the class with a handy winner in D, who goes to the top of the class for her overall dairyness and angularity throughout. She is sharper in her shoulder and carries that sharpness and angularity back through her rump and thighs. Furthermore, D has the best udder in the class. She has an extremely youthful mammary system carried high above her hocks and a very definite advantage over B in snugness and height of rear udder. I do admit B has tremendous length of body.

In a very close middle pair, B over A. I am giving the nod to B for her advantage in frame and body capacity. B shows more depth, openness, and spring to rib. In addition, B is more correct in her rump structure being more nearly level from her hooks to her pins, noting that A is slightly high in her pins. However, I do grant A for having a higher, wider rear udder attachment.

It is A's height, width, and uniform width from the top of her rear udder to bottom of her udder floor that takes her over C in my bottom placing. Furthermore, A exhibits a more desirable size and shape of teat. Also, A shows more cleanliness and angularity throughout. A is longer and leaner through her head and neck and cleaner through her rump and down through her thighs. In addition, A has a definite advantage in her feet and legs as she tracks straighter in both her front and rear legs. However, I do grant C shows more depth and openness of rib. I would just like to lengthen her out from end to end and give her some more dairyness and cleanliness throughout to place any higher in the class. 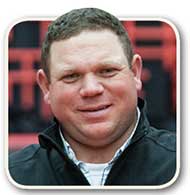 Robert Teixeira
Turlock, Calif.
Teixeira placed the HOLSTEINS. Gil-Tex Farms is owned by Gilbert and Linda Teixeira and based out of Turlock and Patterson, Calif. Son Robert serves as herdsman for the 1,500 head of registered Holsteins and manages the second facility in Patterson with his wife, Kate. A graduate of Cornell University, Robert was a member of a national champion FFA and Post-Secondary Dairy Cattle Judging Team, and later his Cornell team placed second at the Collegiate level. Showing on the state, regional and national level, Robert exhibited the Reserve Supreme Champion of the Junior Show at the 2001 World Dairy Expo.
SCORING KEY