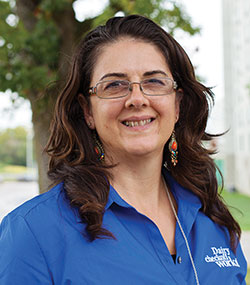 Marilyn Hershey
Every day is Mother’s Day on a dairy farm. We work with our four-legged matriarchs every day. Some of our mothers are experienced and well seasoned. Some are new and need guidance.

Whether it’s a veteran cow that knows exactly what to do when its calf arrives or a young one that does not have a clue, one thing is for sure: As farmers, we take over the role as caretaker of the baby early in the process. There are days that care is taken to extreme measures.

It is up to us to keep them healthy and happy, and we have everything to gain by providing their daily needs in the best way we can. Those calves are our future, and a lot is invested in their early years.

One way we keep an extra eye on things is by having cameras in the calving area. The other week I noticed a heifer was pushing. I knew that they were short staffed in the barn, so I went to check things out.

When I got out there, the calf was caught at its chest, and the young mother decided she was finished pushing. At first glance, I thought the calf was gone. When I grabbed its feet, it blinked.

Pulling the calf out was the easy part. The hard part was convincing it to take a breath on its own. I tickled its nose, and it snorted but didn’t take a breath. I cleared junk from its throat, but it still didn’t breathe unless I pushed on its chest. So that’s what we did for quite awhile. I even gave the calf a puff or two through its nostrils until it decided breathing was not as difficult as it first thought.

The fact that the calf was out of one of our better cow families held weight, but my parental instinct is still strong enough that I would do CPR on any one of our calves. Farmers are like that, we are the protectors and providers for our animals.

As a mother, I protected and provided for many years, some of those years more intensely than others. When our son, Robert, was diagnosed with acute lymphoma leukemia, we spent many days in the hospital. Several months into the experience, one of the nurses admitted that they called me “mother bear.” I took the title as a compliment.

I am not saying we need to be freakish about it, but as farmers we are all a little “mother bearish” about our animals.

Last year, Duane and I attended Robert’s graduation from Montana Bible College in Bozeman, Mont. We took advantage of Yellowstone and spent a couple days in the beautiful National Park. A special highlight was watching a mother grizzly bear interact with its three cubs.

There was a fast-moving stream and a steep bank between us, but every once in awhile the bear stopped digging for bugs and looked up at the people oohing and aahing over its young family. The cubs were oblivious to us; they were only concerned with harassing each other, but the mother was very much aware of our every move.

I gained a new respect for the enormity and strength of a mother bear, and I was very glad to come home to my safe haven of animals.

It does not happen often, but every once in awhile a calf gets out of its hutch. A few months out of the year the crops surrounding the calf pens are taller than the calves themselves. And it is always a rush to get them corralled back to their hutch before they disappear in the cornfield.

One day an employee informed me that a calf was missing. The sun was beating down hard, the air was heavy, and the calf was nowhere around. It most likely found shade in the cornfield. Our cornfields are a few acres large, not endless acres as in the Midwest and West, but it still would not take long to confuse a young calf.

I walked all around the fields, trying to get an idea where the calf might be. I walked into the corn several rows and called for it. But I still could not find it.

I thought about it that day, that the mother of this calf would have given up a long time ago. One look at the delicious corn and alfalfa fields and the mother would have been munching to satisfy its own desires and totally forgot about its calf.

I finally got tired of walking and jumped on the Kubota in hopes of finding the calf an easier way. After driving around the hutches a few times, I rounded the corner and there it was, looking intently at the Kubota, wagging its tail and licking its chops. I should have thought of the Kubota before traipsing around the farm in search of it. To the calf, the Kubota means food; it is the vehicle that brings the calf milk twice a day. The vehicle does not look anything like its mother, but to the calf it means food, and it got its attention more than anything else that day.

This is a special time of year for all mothers, no doubt. As dairy farmers, we are fortunate to celebrate motherhood throughout the year. Sometimes our tender loving care is for our children; sometimes it is for our animals. But we know that every day on a dairy farm is a celebration of Mother’s Day.

Common Threads is a regular column in Hoard's Dairyman. The author and her husband, Duane, own and operate a 550-cow dairy in Cochranville, Pa.

Pick an effective inoculant for your silage
Crops and Forages
Related to:
features
In Features