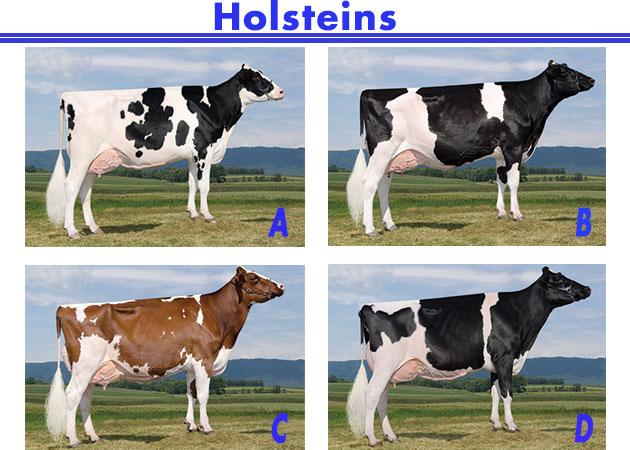 In placing this class of Holstein cows D-C-A-B, Cow D wins on her balance of frame, width of chest, dairy strength, and symmetry to the udder.

She places over C because of the udder. D is more square in her rear udder, has more turn and shape to the udder, and her teats are more centrally placed on the udder floor than the red cow in second. I do grant C has more width through her hips and pins.

In an easier placing, C goes over A for her definite advantage in frame and feet and legs. The Red and White Holstein stands more square on her front legs, has more strength to the front end, and has more depth from the crops to the chest floor. Also, I prefer the leg set and the strength of the back pasterns on C when comparing her to A. Admittedly, A has teats with a more correct size and shape.

A goes over B in a closer placing. But, given their appearance, A shows more dairy quality in her hide and more angularity from end to end. When viewed from the rear, she has a more square udder with more bloom. She also has more balanced rear quarters, particularly in the right rear. I do admire B’s overall strength throughout, but that is not enough to place her higher in this class. 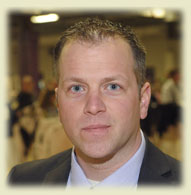 Pat Conroy
Angola, Ind.
Conroy placed the HOLSTEINS. He is a self-employed cattle merchandiser and his career has taken him throughout North America and the world. He has owned numerous animals that either solely or in partnership have won classes at World Dairy Expo and the Royal Agricultural Winter Fair. For his success, Conroy was recognized with the Al Hay Award in 2012. During Conroy’s judging career, he has placed cattle at World Dairy Expo, the Swiss Expo Holstein Show, and the European National Show. Specifically, he has judged both Holsteins and Red and Whites at Madison, Wis. Pat and his wife, Jeannie, have two children.

The rise of the underdog
Features
Related to:
CJC, Holstein
In Cow Judging