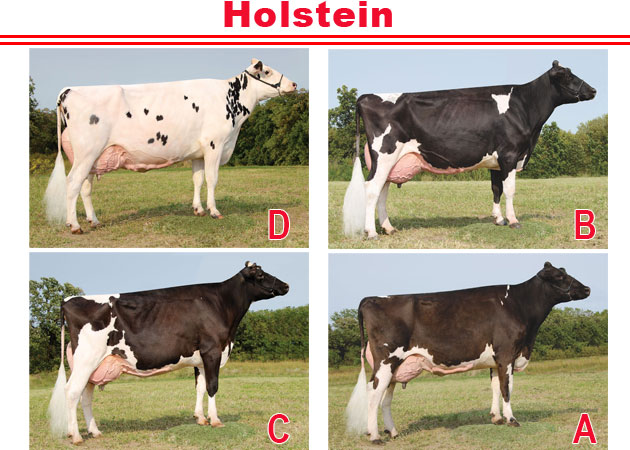 D’s balanced frame and best udder in this class handily sort her to the top. In my top pair, the white D has a definite advantage over B in udder. D has a more youthful udder — holding the udder floor higher above the hock, a higher rear udder attachment, a longer fore udder that blends more smoothly into the body wall, and teats more centrally placed on all four quarters than B. Moreover, D displays less quartering when viewed from the side, has more veination, and more uniform width at the top of the rear udder than does B. Moving to the barrel, D has more depth and circumference of both the fore and rear rib. I admit that B is wider in the rump and lower in the pins than D.

In a close middle pair of similarly made cows, B gets the nod for three reasons. First, B is more open in the rear rib and has more mass to the flank. Second, B has more width, bloom, and capacity in the rear udder than C. Finally, B is less puffy in the right rear hock. Granted, C has more definition of seam at the top of the rear udder.

In my final pair, C has a clear-cut advantage in angularity. C is sharper at the point of withers, is more prominent over the topline and rump, and is more incurving in the thigh than A. Moving to the udder, C is wider in the rear udder attachment, and I prefer C’s texture, quality, and shape to the rear udder. I concede that A has more width and substance in the front end and is less puffy in the right rear hock than C. A is too narrow in the rear udder attachment and not open enough to merit a higher placing.

About the Judge . . . Elizabeth Hall 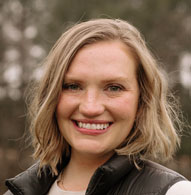 Elizabeth Hall
East Montpelier, Vt.
Hall placed the HOLSTEINS. Hall grew up on her family’s Holstein farm near Hutchinson, Minn., and graduated from the University of Minnesota where she was a member of the dairy cattle judging team. She now resides with her family in East Montpelier, Vt., working for Elanco and also specializes in sales and marketing for Fairmont LLC, promoting the 1,400 cow herd’s high genetic value animals and new value-added products. Hall has judged across the Northeast and Midwest and is on the Holstein Association USA judges list. Fairmont has bred or owned a handful of All-American and All-Canadian individuals.

The rise of the underdog
Features