Taking the Ayrshire title after a two-year reign as Reserve

Marilie Gentleman Karmina claimed the Grand Champion honor of the International Ayrshire Show at World Dairy Expo after being named Reserve in 2019. 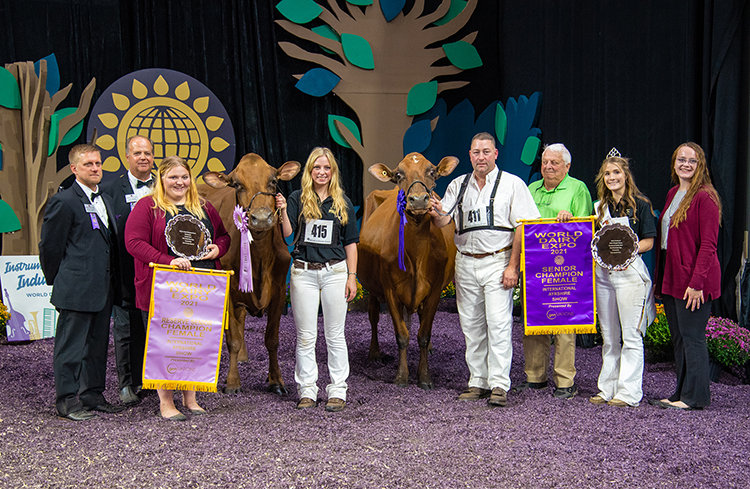 When the reigning Reserve Grand Champion of the International Ayrshire Show strutted on to the purple shavings at the 2021 World Dairy Expo, it was clear the 9-year-old cow wasn’t going to settle for anything less than the top.

“She earned it. She earned it the hard way,” Creek stated. “She ran calves through that udder. She’s milked and come back while maintaining her quality, correctness, angularity, and mammary system.”

The Six-Year-Old and Over Cow was also named Senior Champion and is owned by Budjon Farms and Peter and Lyn Vail of Lomira, Wis. 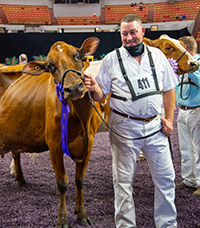 The Reserve Senior Champion, Toppglen Wishful Thinking-ET, came out of the 100,000 Pound Cow class. She is owned by Tanner, Brennan, Marissa, and Logan Topp of West Salem, Ohio, and was also named the Grand Champion and Senior Champion of the Junior Show.

Winning the Heifer Show was Illinois’s Mackinson Gentle Dreams. The fall calf is owned by Ava and Eli Faber. The Reserve Junior Champion was Hawver-Crest Don’t B Suspicious of Walkersville, Md., out of the Spring Calf class and owned by Glamourview-Iager and Walton.

In the Junior Show, the Reserve Grand Champion was Family Af-Ayr Maxxx Deamer. The senior 3-year-old also won Intermediate Champion of the Junior Show and is owned by Rachel Hefel and Mark Fisher of Epworth, Iowa.

Also from the Senior Three-Year-Old class, the Reserve Intermediate Champion of the Junior Show was Moy-Ayr Burdette Lightning-ET, owned by Steve, Pauline, Rebecca, and Emily Schmidt of Delavan, Wis.

Premier Breeder of the show went to Old-N-Lazy of Epworth, Iowa, and Peter Vail of Englewood, Fla., was named Premier Exhibitor. Palmyra Berkely Reagan-ET was the Premier Sire.