Deep Red and White Show ends in victory for Joline

Junior-owned animals tally success in both the youth and open shows. 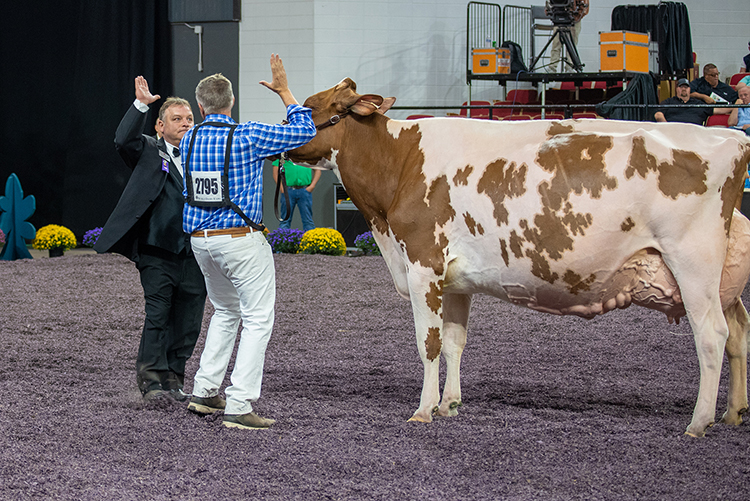 “I am so lucky to judge this show,” said Judge Pierre Boulet of Montmagny, Quebec, as the International Red and White Show came to a close on Friday. “I think this is the best show I’ve ever seen here for the Red and Whites.”

At the end of the day, he chose the top two Six-Year-Old and Older Cows as the best of the 334 head that were presented. It was Antia Absolute Joline-Red that claimed the titles of Senior Champion and then Grand Champion for owners Milk Source and Laurie Fischer of Kaukauna, Wis. “It’s unbelievable to see a cow like this,” Judge Boulet said, praising her dairyness, strength of udder attachments, and the way she tracked on her feet and legs.

Following Joline in class, as Reserve Senior Champion, and then as Reserve Grand was the champion bred and owned cow of the show. Westcoast Defiant Addison is owned and exhibited by Westcoast Holsteins of Chilliwack, British Columbia. Judge Boulet also admired her width of udder and outstanding feet and legs. “It’s pretty incredible to have two mature cows with that kind of quality,” he said.

An extremely balanced, wide, sound-legged, and good-uddered junior 3-year-old was recognized as honorable mention Grand Champion after she claimed Intermediate Champion in both the Open and Junior Shows and Grand Champion of the Junior Show. That cow was Scenic-Edge Jordan-Red exhibited by Jacey and Hadley Ross of Delavan, Wis.

The Senior Champion of the Junior Show was the winning 5-year-old and the champion bred and owned junior animal. Mason Ziemba of Durhamville, N.Y., led ZBW-Ziems Listen To Me-Red to all three honors. For Reserve Senior Champion in the Junior Show, Judge Boulet and his associate Richard Landry chose the first-place production cow, Hol-Star Malo Roz-Red-ET exhibited by Connor Correia from Tulare, Calif.