When it comes to milk quality, there are details I can see now that I couldn’t before we had our voluntary milking system. 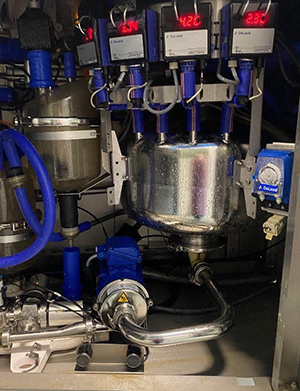 There are many things that we get to see in a different light now that we have milking robots. One example has to do with milking times and mastitis.

In a parlor, you have a milking unit that milks four quarters. You put the unit on the cow, and it milks the cow out. Once the units flow meter reaches a certain point of flow, it considers the cow to be done milking and then retracts the entire unit at once.

There are several different factors to consider when milking a cow. Are all four teats functioning properly, equally, and efficiently? If not, what can be done? In parlor, we can have three-quartered cow, where one of the quarters is dried up. You can just cap one part of the unit and still milk the cow.

The good thing about a parlor is every single cow is looked at more than once a day, each quarter is stripped, and the milk is evaluated by a human eye. You cannot get any closer to seeing your product than that, right?

This was a huge concern for us before switching to voluntary milking systems. The cows were not going to be each looked at multiple times a day. We would not see the milk stripped out of each cow. That was a hard gulp to swallow.

So, what can the robots do for us to actually get a better grasp and feeling on the fact that we were losing the human touch and eye on each cow every day? A robot samples every milking and does an analysis on the sample of milk before the milk is ever pumped from the robot to the tank. For instance, if the cow had injured the udder and there was blood in the milk, the robot would flag the milk, send it down the drain instead of the tank, and then run a sanitization cycle before milking another cow. If the cow has mastitis, the conductivity levels would be higher and it would flag the cow, send an alert, and go through the same cleaning process.

The system that we have also uses what we call MDI or Mastitis Detection Index. This takes in milk production levels, quality of milk, the cow’s activity level, and so forth. It takes all these factors into consideration and leaves a note on your computer screen saying it thinks this cow may have mastitis. I have had cows come through with an elevated MDI. I would walk out there, strip the cow myself, and not seen any flakes with my eye, but then the next milking the cow gets a conductivity notification. I checked again and still saw nothing, but by the next milking, the robot was sending the alarm again. We striped her and yep, there was the mastitis, plain to see. The system has picked up the mastitis well before any of us could see it with our eyes. To me, this is a huge factor, being able to fight the mastitis by pulling her from the herd and running a somatic cell count on her before even being able to see the mastitis.

We have seen a reduction in mastitis over the past couple of years with robots. Every now and again we will have an issue with a robot for a short time concerning mastitis. But overall, we have seen a reduction. I think a big reason for this is what I talked about earlier; in a parlor, the fact the unit is taken off all at once. In a robot, each quarter has its own meter and each quarter is milked out properly.

An interesting thing pertaining to that is that I have found out that we were potentially milking three quarter cows in the parlor unknowingly. Yes, all four quarters striped out with milk, but one of the quarters on average may have only been giving two pounds each time. With that being said, a cow that is giving around 10 to 12 pounds in each of the other quarters means that light quarter was being heavily over milked in the parlor. This was potentially causing mastitis, and we were treating quarters only averaging around two to three pounds.

This is just an example of some of the neat things we did not really take into consideration before switching to the voluntary milking system!