Get the most from your hay with the right storage strategy 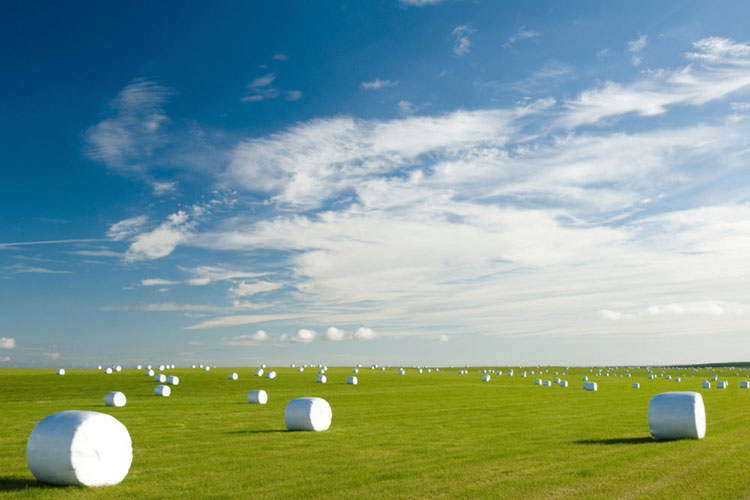 The moment forage is baled, losses begin. Adequately protecting bales from the elements can help minimize loss and make your hay last longer. So, what’s best for your operation?

Exposing large round bales to moisture and storing directly on the ground can lead to major losses from water infiltration, spoilage, pest and disease issues. High-humidity environments can also lead to quicker spoilage if bales are left uncovered.

“The amount of precipitation that falls on unprotected bales can affect storage losses. However, precipitation alone is not a good indicator of projected losses. Much of the dry matter loss associated with outside storage is the result of microbial respiration, where carbohydrates in the plant tissue plus oxygen are converted to carbon dioxide, water and heat,” according to Oklahoma State University Extension Agricultural Engineer Raymond Huhnke. “Extended periods of warm, humid and cloudy conditions with abundant rainfall are favorable for microbial activity, resulting in greater losses of forage dry matter and quality than in periods of cool, dry and sunny conditions.”

How much can be lost?

University of Tennessee research shows bales stored with no protection directly on the ground could lose around 37 percent of each bale during normal storage longevity (ranging from six months to 20 years, depending on the storage option used), typically coming from the outer few inches of the bale where hay is most exposed to the elements. Eliminate one of the variables by either covering bales stored on the ground or elevating unwrapped bales and losses could fall to just under 30 percent. Wrapping bales stored on the ground can drop losses to around 19 percent, while covering bales and elevating them off the ground can drop losses to around eight percent. Storing bales inside and off the exposed ground can yield the lowest loss at around six percent.

“Each method of hay storage has different costs associated with it and one of the major costs is associated with storage loss,” said University of Tennessee Agricultural Economist Andrew Griffith. “The more hay lost to storage means the more hay that must be harvested to meet winter feeding demands.”

Solid bales and the right location

The first step to help protect your large round bales starts before they’re even out of the field.

Hay loss can be minimized by how they’re arranged outdoors. According to University of Minnesota Extension Equine Specialist Krishona Martinson, the optimal location has good drainage and provides a surface between the hay and the bare ground to prevent ground moisture absorption. Moisture from the ground accounts for around half of overall hay loss in bales stacked outdoors, according to Huhnke.

“A well-drained, 4 to 6 inch (10.2 to 15.2 cm) coarse rock base will help minimize bottom spoilage, as will storing on wood pallets,” Martinson said in a university report. “Store round bales end-to-end when storing outside. Position round bales as tightly as possible in long lines on a well-drained site. If more than one line of bales is needed, space adjacent lines at least 3 feet (.9 m) apart. This will increase air flow and allow sunlight to penetrate the bales.”

If stored outside, plastic tarps, bale wraps or sleeves offer varying levels of coverage from precipitation. Though more costly than tarps, bale wraps and sleeves can offer better protection from environmental moisture, both from the ground and precipitation. Breathable netwraps help keep bales dense and allow the outer hay layers to shield inner layers from damage, but are not completely waterproof. Plastic bale wraps are impervious to moisture, but also don’t allow moisture to escape from bales and can promote spoilage in some cases.

“Some farmers believe that more layers, up to six, are well worth the extra cost,” according to Michigan State University Extension Crop Production Specialist Jim Isleib. “A thicker barrier is more dependable than a thin one, but more costly.”

All of these types of storage costs should be contrasted with the changes in potential storage losses to determine what will work best for your hay.

“The total storage cost is the sum of the storage system and the cost of the projected losses while bales are in storage. If bales were stored under a plastic cover, storage cost with an estimated eight percent ($6.40 per ton) dry matter loss would be about $10 per ton ($3.60 per ton plastic cost plus $6.40 per ton loss in hay value),” Huhnke said. “If the same bales were stored outside uncovered, loss of hay value could be as much as 10 percent or $8 per ton. This assumes the bales are well-shaped with a tight outer layer, but in contact with the ground. If elevated, the dry matter loss can be less than four percent or $4 per ton.”

Traditional twine carries a cost of around $0.50 per bale, while plastic tarp-type covers can range from $1.25 to $1.75 per bale depending on the amount of times the bales are covered. Netwrap costs between $1.25 to $1.45 per bale, but can be more efficient from a time and labor perspective.

Twine sometimes requires as many as 20 to 30 turns around the bale to provide sufficient structure and protection. The same coverage can be provided by netwrap in as few as one-and-a-half turns, making the process much quicker and more efficient during baling.

Plastic bale wrap carries a cost of between $3.60 and $3.80 per bale, though that cost can vary depending on how many layers of the plastic wrap are used. The heavier and denser the forage being baled, the more layers typically recommended for longer-lasting protection. In some situations, a combination of netwrap and up to six layers of plastic wrap is recommended.

Beyond the specific costs for bale wraps and protection, producers should take into account both the time they will store their bales and determine what level of loss is acceptable in deciding what strategy is best for them.

“Forages packaged in large round bales benefit from protection while in storage. However, there are several factors that must be considered in justifying the cost of providing this protection,” Huhnke said. “These factors include hay value, projected in-storage losses, local environmental conditions and where the hay will be used.