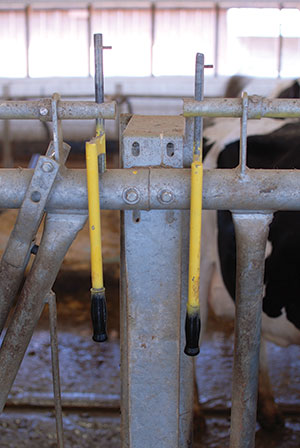 Do you ever worry about leaving cows potentially locked up in the headlocks? Mike McLeod had the same concern and decided to do something about it. He took yellow spray paint to clearly identify the lockup mechanism on the headlocks. If the arms are raised in the air, Mike immediately knows that the cows have not been released from lockup because he can see the bright yellow handle. This is very important since the farm, located in Caronport, Saskatchewan, Canada, also has alley scrapers.