After the scorching heat wave that gripped California in 2006, the DeJagers doubled down on their efforts to keep cows cool, and it has paid off in cow health and the bulk tank. Art, Renae and Alex DeJager have done a great deal of research to select the best equipment and incorporate the best stall design and bedding. As a result, their Vista Verde Dairy averages 80 to 85 pounds of milk a day on twice-a-day milking.
Content cows, eating, chewing cud and resting is the goal of every dairy producer. However, achieving that outcome when temperatures peak above 100°F during mid-August might be more of an altruistic goal than an on-farm reality. That is no longer the case for Art and Renae DeJager and their son Alex of Vista Verde Dairy, as they set out to transform cow cooling after an extreme heat wave impacted California nearly a decade ago.

"Our barns have transitioned a great deal since we started dairying in Chowchilla," said Art DeJager, who was the first in his family to start dairying in California's Central Valley. "We once built barns to mitigate the effects of winter rains, now we build them for cooling," said the dairyman who grew up in the Orange County milk shed and has been farming on his own for nearly four decades.

From rental to new farm

Art and Renae had a humble start in the dairy business. In 1977, the young couple started out milking 300 cows in a rented flat barn parlor situated on a drylot dairy. Once they had built up enough equity, the grandchildren of Dutch immigrants built a new dairy in 1980 that also featured sheltered barns.

"We put in a lot of work in those early years," said Renae, recalling their start in Chowchilla as 20-year-olds. "I can hardly remember a day that Art wasn't out working on the dairy by 4 a.m.," she said. "We wanted to make our business flourish."

As the DeJagers turned their attention toward cow comfort, the couple became one of the first in the area to transition from exclusive drylot housing to freestalls. Each time they built a new freestall, the DeJagers utilized the latest design and installed the best equipment. Taking a tour of their dairy that has grown from 300 to 3,200 cows is clear documentation of that transition.

Dealing with 100°F temperatures can test people and cows. After the 2006 heat wave, the DeJagers knew they needed a different approach.

"Feedline misters are a good way to cool cows," said son Alex, who is the farm manager these days. "But in 100°F-plus weather, misters can raise the humidity in the barn over time and cows don't stay cooled. Since we use flush water to clean our barns, we pursued the idea of soakers." 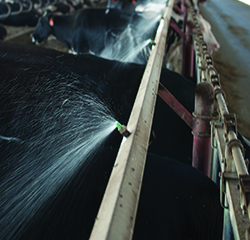 "Soakers get the neck and shoulders really wet, and that's an area where there is a lot of blood flow on a cow," added Art. "That high concentration of blood flow speeds up cooling," he pointed out during our hot afternoon August visit.

Walking through the barns, one can quickly see other innovations that have aided cooling. That includes higher sidewalls that have transitioned from a 12- to 18-foot height and more open eaves that now span 4 feet across at the peak to expedite the flow of hot air out of the barn.

"It's important to get the opening in the ridge cap right," Art pointed out as the afternoon sun was directly overhead. "At a 4-foot width, the afternoon sun just misses falling on the cows' heads at the feedbunk. That sunshine, of course, would cause additional heat stress and feed intake would drop off," said the dairyman who is a lifelong student of cow comfort.

While the DeJagers have had fans in their barns for a number of years, the most recent additions have transformed airflow and reproduction. That reproduction standard includes a 23 percent pregnancy rate through the summer on A.I. breeding that is mainly done following standing heat.

"We move so much more air through the barns," said Alex, a graduate of California State University-Fresno. "We achieve a wind flow of 8.5 miles per hour (mph) at the end of our barns," he went on to say, pointing out that all the sidewalls are completely open. This also has been accomplished with energy efficiency in mind.

"The fans are set up to begin turning on at 70°F at 30 percent capacity," said Alex, who was a member of a first-place North American Intercollegiate Dairy Challenge team in 2011. "For every additional 2°F, the fans turn on an additional 30 percent until each one is running at full speed," he said, noting that thermostats and a computer system monitor temperatures and run the system.

An additional measure that considers energy efficiency and electrical draw, fans throughout the barn get activated one at a time. "Only one fan turns on at a time . . . one every 30 seconds," said Alex, noting it reduces the draw on the electrical grid.

To encourage cows to eat and to improve hoof health, the DeJagers have installed rubber belting in nearly every barn. However, the belting doesn't run the entire width of the alleyway.

"We put indentations as we poured the concrete for our barns," said Art. "Near the feed aisle, we have three indications to place rubber: one each for the front and back feet while cows are eating and a third one where cows walk," he explained, also pointing out the single row of rubber belting behind the freestalls.

Cows are bedded with manure solids. In the dry California weather, solids often reach 90 percent dry matter before being placed into freestall beds. Bedding is added twice a week on top of mattresses with a 2-inch layer being the standard at Vista Verde Dairy.

To help recover and create drier manure solids, the DeJagers installed an updated screen separator. "The vibrating mechanism extracts 25 percent more water than the older model," Alex pointed out. In winter, bedding that has been dried throughout the remainder of the year is used by the dairy since it is more challenging to reach the 90 percent dry matter standard.

The dairy, located two hours south of Sacramento, is home to the entire dairy herd except for young calves under four months of age. Those young herd replacements start life at a calf ranch in Hanford, roughly an hour south of the DeJagers.

Soon-to-calve cows are housed in a bedded pack barn. The bedding contains of mix of compost with an almond hull base.

"We use a grouping strategy to move cows through the barn. Once a cow joins a group, they stay in the group until calving," said Alex. "Cows enter the barn at the west end, and each week the entire group moves one pen down until they reach the calving area."

The DeJager operation is clearly a family affair. In addition to their Chowchilla dairy, Art and Renae's son AJ runs a dairy in Ault, Colo., along with his brother Aric. And just like Art and Renae did in the early 1970s, all three sons who are in the dairy business rise before daybreak to ensure the success of the family business.