The Washington Post reporter left countless positive comments about the dairy industry out of his article. Temple had the email evidence to prove it. 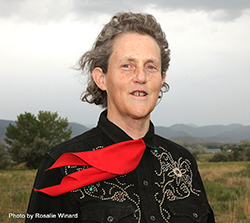 The last thing I expected when I wrote my blog about Temple Grandin and her comments in The Washington Post was to get an email from Temple Grandin herself.

But that's exactly what happened. In her email, Temple said that Roberto Ferdman, The Washington Post reporter, left her positive comments about the dairy industry out of his article. Included with the message to me were carbon copies of the email conversation she had with Ferdman, in which she chastised Ferdman for not being objective.

Temple also gave me her cellphone number, so I emailed her back and asked if she would be willing to answer a few of my questions.

Last Friday, what started as an official, recorded interview turned into an hour-long conversation about dairy farms and dairy cow well-being. Many of Temple's comments while we talked were echoes of those she shared in a statement released last Thursday.

"I want to make it very clear . . . there are some dairies out there doing an absolutely excellent job, and they need to be praised for that," Temple said.

She said that at the last dairies she visited in Colorado she found very low levels of lameness and barely could find a hock lesion.

"Everything looked wonderful," she said.

She also observed that the dairies in Colorado had smaller cows, which I believe she correlated with their well-being.

When we started talking about Gigi, Temple said that she didn't know cows like Gigi existed before the story came out in The Washington Post.

"What did they do to get Gigi to live so long? How are they feeding her? Obviously, they're doing something really right. I'd like to learn more about her," Temple said.

In the interest of being objective, Temple also repeated some of the concerns she has about dairy cows, especially dairy cull cows, and we talked about areas where more research is needed.

So what does all this mean for dairy farmers?

We need to show her that dairy cows are healthy, regardless of their size.

We need to explain that cows aren't being culled after 2.4 lactations because they're no longer capable of milking; they're leaving the herd because we choose to fill their spots in the barn with younger cows with better genetics. We have improved reproduction and calf rearing so much in the past 10 years that most farms have more replacements than they need. Ultimately, culling younger dairy cows means higher-quality beef at affordable prices for consumers. 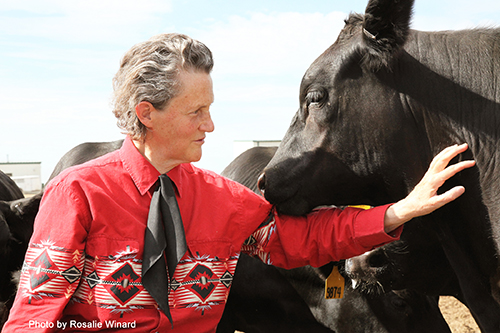 We need to continue research that quantifies dairy cow well-being. As Temple said, it's hard to measure improvement if we're not measuring.
We cannot change the fact that popular media reporters will reach out to Temple Grandin for quotes and explanations about dairy farming. What we can do is give Temple a better picture of dairy farms and a better understanding of our commitment to constant improvement.
There's no question that Temple's comments in The Washington Post felt like an attack. But what will define us as dairy farmers is how we respond. We can complain about the situation or we can do something about it.
When I asked Temple if she would be willing to visit with more dairy farmers, her response was an enthusiastic yes.
Later this month when Temple comes to Wisconsin for a speaking engagement, I'll be taking her to a dairy farm to see firsthand how well dairy cows are cared for.

The author is a dairy farmer and writer from central Minnesota. She farms with her husband, Glen, and their three children. Sadie grew up on a dairy farm in northern Minnesota and graduated from the University of Minnesota with a degree in agricultural communications and marketing. She also blogs at Dairy Good Life.
..
comments powered by Disqus