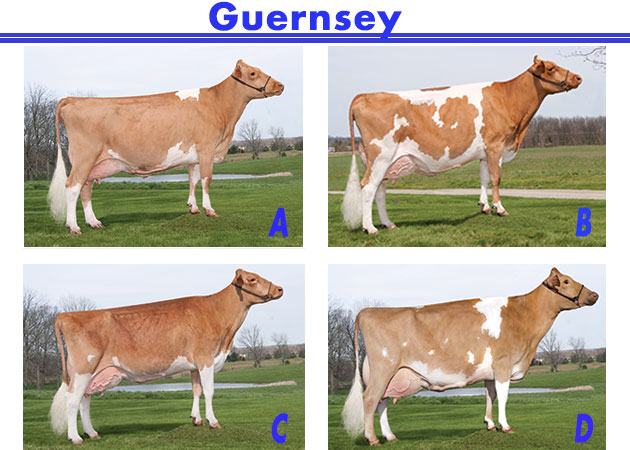 I place this class of Guernsey cows B-D-A-C. In a very close placing, B places over D for the advantage in the udder. B has a more youthful appearing udder, carrying her udder much higher above the hocks. B also has a higher and wider rear udder attachment. Final point in the udder, B has a smaller, more desirable teat size. Furthermore, B is a more angular individual. However, I do admit that D has stronger pasterns and more overall width through the rump.

It is the clear-cut advantage in feet and legs that placed D over A. D has much less set to the hock with stronger, less puffy pasterns. D is a longer cow from end to end than A, in addition to being more nearly level from hocks to pins with a wider set of pins. Final point in D’s favor, she has more depth and openness to both fore and rear rib. I must admire that A carries her udder higher above the hock with a wider rear udder attachment.

In a logical bottom placing, A places over C for the advantage in the front end. A has more width and expansion of the chest floor resulting in her front feet being placed more squarely to the ground. Moreover, A has more spring and depth to the rib. To tip the scales even further, A has less tilt to the udder floor and has a longer fore udder that blends more smoothly into the body wall. C is the most angular cow in the class, but she lacks the quality of udder to place any higher.

About the Judge . . . Karen Johnson 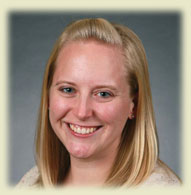 Karen Johnson
Wilmar, Minn.
Johnson placed the GUERNSEYS. A graduate of the University of Minnesota-Twin Cities, Johnson now works for the University of Minnesota Extension in McLeod and Meeker Counties. She plays an active role in her family’s Up the Creek Farm and its Guernsey herd in Lester Prairie, Minn. She is a coach for her county 4-H dairy judging team, serves as an official for the National 4-H Dairy Cattle Judging Contest, and has judged several local and district shows. She won the Merle Howard Award given to the top junior exhibitor at World Dairy Expo. Johnson and her husband, Beau, have a small hobby farm.

Another scoop of success for Malt in the Guernsey show
Hoards at Expo
Related to:
CJC, Guernsey
In Cow Judging