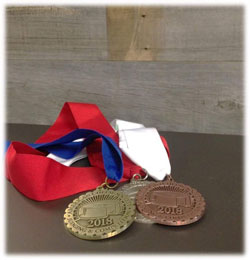 LaClare Family Creamery — part of the Mosaic Meadows family of cheeses — continues to make its mark at the American Cheese Society (ACS) Awards.LaClare Family Creamery — a Malone, WI-based family-operated, artisanal goat farm — won First Place/Best of Class for its new Grevalon Cheese at the American Cheese Society Conference (ACS) in Pittsburgh, one of the country’s most prestigious and rigorous cheese competitions.
Grevalon is a farmstead, washed-rind, goat-milk cheese — aged more than 45 days — which competed in the Raclette- style class.
“We face extraordinary competition from the world’s best cheesemaker every year, so it’s an honor for one of our new cheeses to rise to the top,” said LaClare Cheesemaker Katie Fuhrmann, who accepted the award alongside Affineur David Rogers.
The ACS is one of the three major cheese competitions in the U.S., along with the World Championship Cheese Contest in Madison and the U.S. Championship Cheese Contest in Green Bay.
This year’s ACS Competition broke all records for the professionally judged contest with more than 2,000 entries of cheeses and cultured dairy products from nearly 300 companies, representing the United States, Canada, Mexico and other nations.
About Mosaic Meadows
Mosaic Meadows is a company of family-operated, world-class cheesemakers: Wisconsin-based La Clare Family Creamery and Saxon Creamery along with Verona, Pa.-based Lamagna Cheese Co.
For more information, visit www.laclarefamilycreamery.com, www.lamagnacheese.com or www.saxoncreamery.com or contact Carrie Liebhauser, Phone: (920)265-6607, Email: carrie@rebelcreativegroup.com.