A new product is coming to the aid of alfalfa growers in arid climates. Harvest Tec, an inventor company and purveyor of tools and technology for making better quality hay has introduced its new Dew Simulator. Alfalfa growers, particularly in Western U.S states are often forced to shut down during harvest time for lack of sufficient moisture to retain valuable alfalfa leaves during baling. They are obligated to wait for evening dew to roll in, allowing for some hours of night time baling. Occasionally natural dew doesn’t arrive, but baling must proceed to stay on schedule. 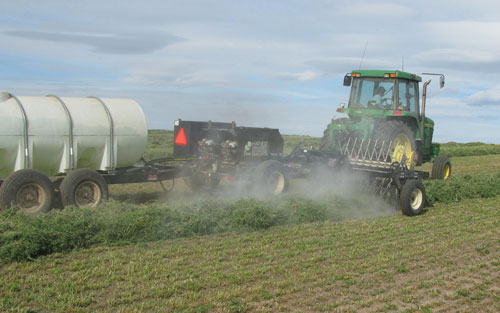 The Dew Simulator adds moisture to the windrow from the bottom up, much the same as natural dew. It is designed to increase hay moisture from 6 to 10% up to a more ideal 14 to 16% level. A 70 to 100 hp tractor operates the unit running ahead of the baler.

“We’re not bothered by having to hay all night anymore,” says Rusty Lytle of Wall, SD who has put a full season in with the Dew Simulator. “We actually get so much more done it’s unreal. And we still get a good night’s sleep. We’re cutting down 600 to 700 acres at a time because we have a wider baling window now of two to two and a half days. We have reduced our harvesting time for 600 acres down from two weeks to four and a half days. Our irrigation restarts sooner and our yields are going up. It’s a total win!” he said.

The Model 720 uses diesel fired heaters to bring water temps up to 240 degrees, then applies the heated mist at a pressure between 250 and 1,200 psi to deliver 20 to 40 micron size moisture droplets. With no special water requirements the operator has the ability to refill a water trailer from any water source.

Another Dew Simulator proponent is Doug Kizzire located in western Nebraska. “Baling hay too dry keeps the leaves out of our bales and costs us money,” he said. “With the Dew Simulator, leaves go into the bale increasing not only the weight, but also the quality. Adding artificial dew in our dry climate has provided a big benefit for us here on the high plains of Nebraska” he continued.

See it on display.