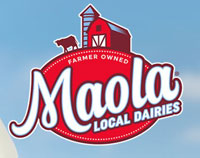 Milk Life and Maola Local Dairies are proud to partner with U.S. Olympian and Virginia Beach native field hockey player Stefanie Fee to donate a year’s worth of milk to the Foodbank of Southeastern Virginia and the Eastern Shore on Giving Tuesday, a day of action dedicated to helping others.
Trusted by moms, kids and athletes, milk contains a package of nutrients that’s hard to find in any other single food or beverage. It’s simple, wholesome, affordable and naturally nutrient-rich. Yet, not all have access to it. Milk is the most requested and least donated item to food banks. On average, food banks are only able to provide the equivalent of one gallon of milk per person per year.
Nine out of 10 U.S. Olympians grew up drinking milk. With its 9 essential nutrients, including 8 grams of natural protein in every 8-ounce glass, milk has been a staple for most U.S. Olympians, as they strive for greatness in athletic performance. Milk is a proud sponsor of Team USA – fueling and supporting athletes’ pursuit of excellence at the Olympic and Paralympic Games.
“My Team USA journey started right here in Virginia Beach. Fueling with Maola milk helped me train at the highest level,” said Fee. “It feels so appropriate and fitting to give back to the community that supported me and cheered me on throughout my career, by donating milk to those who need it most as I retire from the U.S. Women’s National Team.”
Team Milk athlete Stefanie Fee was a four-year starter at Duke University from 2008-2011. She helped the Blue Devils to a pair of NCAA Quarterfinals appearances. She earned NFHCA Second Team All-America honors in 2011 and graduated with her bachelor's degree in psychology in 2012. She has been on the U.S. Senior National Team since 2012, earning 114 international caps. She helped Team USA win gold in the 2015 Pan American Games, the 2014 Champions Challenge and the 2013 World League Round 2 Tournament. Fee won the bronze medal in the Champions Trophy in London in 2016. She competed for Team USA at the Olympic Games in Rio, where Team USA advanced to the quarterfinals.
“As part of our efforts to assist food-insecure children through our child nutrition programs, we are committed to providing families with access to healthy, balanced meals,” said Ruth Jones Nichols, CEO, Foodbank of Southeastern Virginia and the Eastern Shore. “Milk, in particular, is packed with nutritional value essential to the growth and development of children, and we are grateful for this contribution as we work to serve the more than 41,000 food-insecure children in our service area.”
“Whether you are fueling a training session or a family gathered around the kitchen table, milk powers champions, and we’re proud to be a part of that process,” said Amber Sheridan, spokesperson for Maola Local Dairies. “Putting milk into the hands of people who need it most, is an act of a true Team USA and Team Milk Champion. We commend Stefanie on her outstanding field hockey career and we are proud to have helped fuel her Team USA journey.”
About Maola Local Dairies/Maryland & Virginia Milk Producers Cooperative Association
Owned and operated by local dairy farm families, Maryland & Virginia has been providing consumers throughout the Mid-Atlantic and Southeastern U.S. with fresh Maola milk and dairy products since 1920. Maryland & Virginia owns and operates two fluid bottling plants and two ingredient manufacturing plants. For more information, visit www.maolamilk.com or www.mdvamilk.com.
About the Milk Processor Education Program (MilkPEP)
The Milk Processor Education Program (MilkPEP), Washington, D.C., is funded by the nation's milk companies, who are committed to increasing fluid milk consumption. From America’s farm families to milk companies, the full dairy community helps educate consumers about the powerful nutritional benefits of milk – with 9 essential nutrients, including high-quality protein, in each 8-ounce glass.
About the United States Olympic Committee (USOC)
Founded in 1894 and headquartered in Colorado Springs, Colorado, the United States Olympic Committee serves as both the National Olympic Committee and National Paralympic Committee for the United States. As such, the USOC is responsible for the training, entering and funding of U.S. teams for the Olympic, Paralympic, Youth Olympic, Pan American and Parapan American Games, while serving as a steward of the Olympic and Paralympic Movements throughout the country. For more information, visit TeamUSA.org.
About the Foodbank of Southeastern Virginia and the Eastern Shore
Since 1981, the Foodbank of Southeastern Virginia and the Eastern Shore, a member of Feeding America™ and the Federation of Virginia Food Banks, has been providing food for hungry people throughout Southeastern Virginia and on the Eastern Shore. In our mission to lead the effort to eliminate hunger in our community, the Foodbank has distributed over 331 million pounds of food equating to over 276 million meals throughout our 4,745 square mile service area, which includes the cities of Norfolk, Portsmouth, Chesapeake, Suffolk, Franklin and Virginia Beach as well as the counties of Southampton, Northampton, Sussex, Isle of Wight and Accomack. During the 2016-2017 fiscal year, the Foodbank distributed over 18 million pounds of food equating to 15 million meals to the community. For more information, visit foodbankonline.org.