Local leaders and supporters of agriculture came together March 19 to celebrate National Ag Day at both Lakeshore Technical College’s School of Agriculture and the Farm Wisconsin Discovery Center, Manitowoc. Together they recognized and commended agriculture in Wisconsin, as well as the advances, training, and the people who keep the industry thriving. 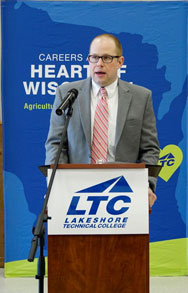 Dr. Paul Carlsen
LTC President Dr. Paul Carlsen welcomed members of the Wisconsin Technical College System State Board, LTC Board of Trustees, LTC Foundation Board, students and others. Carlsen addressed the great role agriculture plays in our local area and the nation. He also pointed out the college’s importance to the industry through its School of Agriculture which offers a wide variety of programs. “At our college, we take great pride in helping train the next generation of farmers who will keep our families fed and our economy strong,” he said.

Hosting the event at Farm Wisconsin Discovery Center, which opened last summer, recognized the partnership between it and LTC. LTC provided space, technology, and various services to Farm Wisconsin staff as they worked toward opening their doors. LTC’s new School of Agriculture is located next to the agricultural learning center. 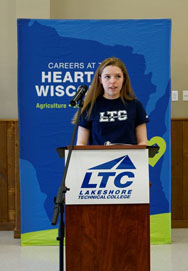 Heather Griesmer
LTC Agribusiness Science and Technology student Heather Griesmer was the featured student speaker. Griesmer works on two dairy farms while attending LTC classes and participating in the Professional Agriculture Students Club. She said, “Working on the dairy farms has reinforced the love I have for ag and dairy. LTC’s Agribusiness Science and Technology program has enabled me to experience real world skills, compete, lead, network with students from other areas, and to zero in on a career that will be a great for me and my future.” 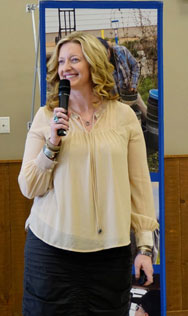 Kim Bremmer
Keynote and national speaker Kim Bremmer, owner of Ag Inspirations, LLC, presented “Celebrating Science, Technology, and Innovation in Agriculture.” She spoke about the drastic reduction in the amount of resources that are used today in agriculture in order to produce more products. This, she said, significantly has reduced the carbon footprint being left by agriculture producers compared to previous generations. Bremmer told the students in the audience that the industry is depending on them to continue the wave of using science, technology, and innovation to advance the industry. 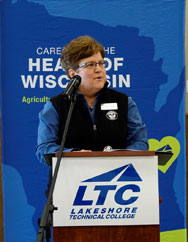 Becky Levzow
Another speaker highlight for students was Becky Levzow. Levzow represents the agriculture industry in her role as a Wisconsin Technical College System board member. She owns and operates dairy and beef operations in south central Wisconsin and serves on several local, state and national industry boards. 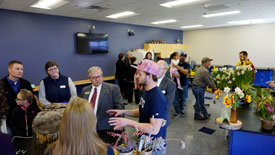 Each year more than 10,000 people enroll in courses at Lakeshore Technical College. They rely on LTC for job preparation, to earn a degree, upgrade a specialized skill, train as an apprentice, or seek a high school equivalency. LTC faculty and staff meet students where they are in life and help them get one step closer to achieving their goals.

Close to 1,000 students graduate from LTC each year, and LTC’s associate degree graduates earn a median salary of $46,800 per year. In addition to the Cleveland campus, LTC serves students in Manitowoc and Sheboygan, and offers classes at four additional sites throughout the district. Visit LTC at gotoltc.edu. 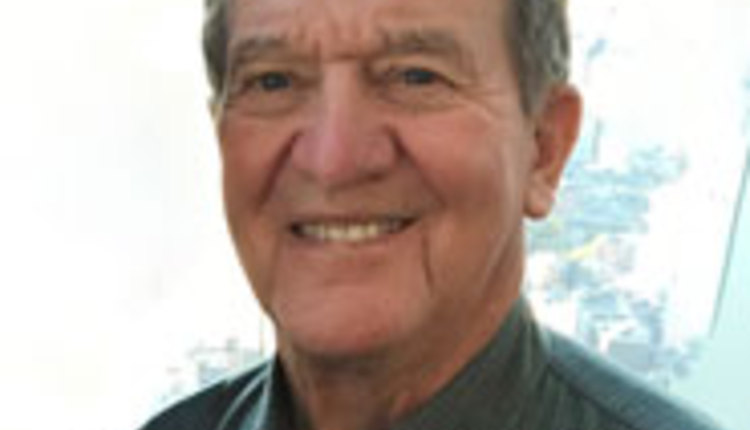