In the midst of a storm

Amid tough economic times, 2019 has also already proven to provide several storms of the weather variety as well. 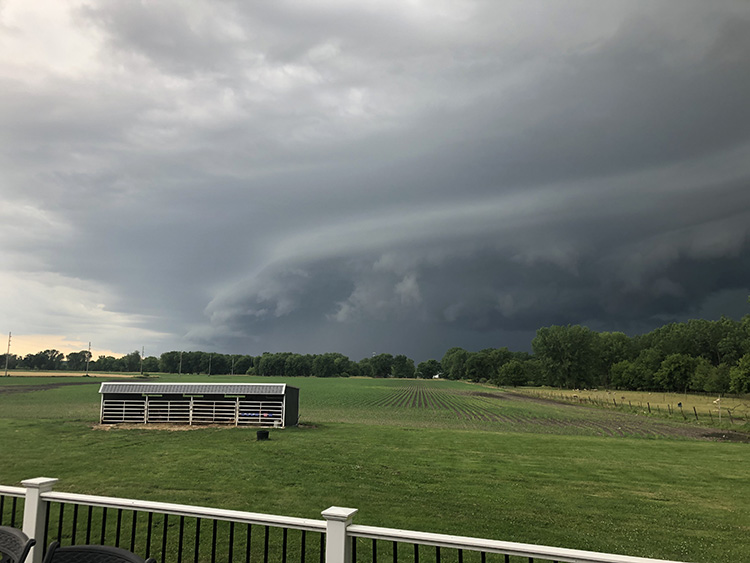 We began planting corn on the third of June, nearly six weeks later than we originally planned. With the clock ticking to get crops in the ground, we took full advantage of the long daylight to push those diesel engines and ourselves to 15-hour workdays.

I felt bad to leave in the middle of chaos, but my daughter and I had planned a vacation to New York to attend the National Jersey Convention in Saratoga Springs. In normal Scott Bohnert fashion, my husband soared ahead full speed to plant beans, care for cattle, try and make hay and more, while us girls were gone.

Scott assured me he missed me, but things were going well at home. It always amazes me that Scott leads with such grit and skill. He sets expectations that our boys met day-in and day-out.

The day my daughter and I arrived home, we both knew life would quickly transform back to the chaotic workload. But, I don’t know if we really understood how quickly chaos would unfold.

I was inside doing loads of laundry and cleaning the house, while the kids were all outside working with Scott. Our oldest boy, Tyler, 15, was on a tractor, hauling round bales from a field about a half mile away. Cassie and Jacob were with their father, helping load round bales from a further away field to bring home before the storm hit. Everyone was working well together.

An hour later, I sensed something was just not quite right. I looked outside to an unsettling sky that didn’t look promising. I quickly called Scott and he assured me they were hurrying to finish up and get home. Minutes later, 70-mile, straight-line winds came, and then the rain. My stomach was sick. My whole family was outside in the storm.

Little did I know that Tyler had driven down the lane to the farm with a round bale in tow, missing the down trees and wires by seconds. A couple minutes later, Scott and the kids pulled in with a full load of bales; I cried with relief.

Tyler and his father, along with Grandpa Jim and Uncle Brian, worked full speed in the pouring rain with chainsaws to clear a path to set the generator up, so we could milk the cows.

Later, they all came inside, drenched and tired, but safe and unharmed.

I went to bed and thanked our dear Lord. In the midst of the storm, look for the helpers in your life. They might just be the ones you kiss goodnight.