On July 9, we received the call we never wanted to get. 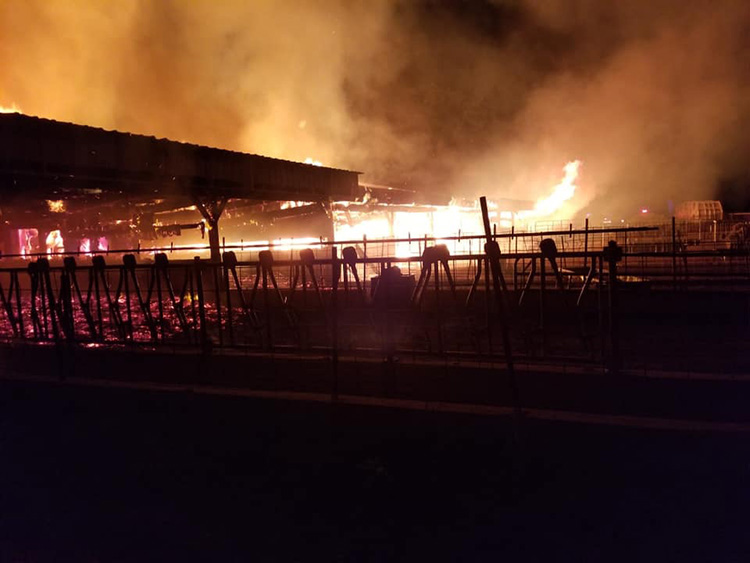 On July 9, our heifer barn and commodity barn caught fire. It is a complete loss.

It’s a day that we will never forget. At a quarter past one in the morning, my husband got a call from his mother, and she was screaming "Fire!" All I can tell you is that running outside and seeing a wall of flames and hearing our cattle cry was an indescribable feeling that nearly dropped me to my knees. I kept thinking I would wake up from the nightmare. I didn't.

I witnessed my husband and father in-law go toward the flames to free the 200 heifers inside the barn. Six fire departments came, and it took them nearly 11 hours to put out the fire. We lost our heifer barn, commodity barn, two skid loaders, and all our hay, straw, cottonseed, and bedding.

The day before the fire went by seamlessly. It was an "all-hands on deck" kind of day, where everyone offered a helping hand, as we performed herd health, finished combining wheat, baled 1,500 small square bales of straw, put it away in the barn, and began round baling the rest. Three generations worked hard for nearly 16 hours that day. We went to bed satisfied with our job performance. 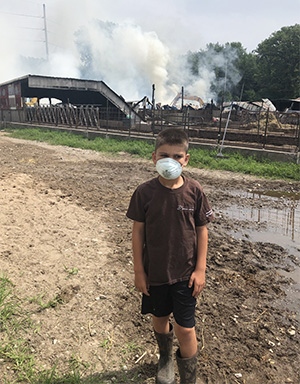 Our youngest son, Jacob, 9, helps with clean-up and moving heifers after the fire.

Three hours later the call came, and it has already changed everything. The hours that followed are a blur. Despite thick smoke lingering all day, so bad that we had to wear masks, many people stopped to offer a helping hand. Many more called or texted to see what they could do. The outpouring of care was tremendous.

We were able to move our 200 head of heifers to four different local farms. A few days later, we did a mass vaccination to the heifers affected by all the smoke in order to help their lungs. So far, they seem to be doing okay.

The uncertainty ahead is overwhelming. This year has been a year that we hope to forget and never repeat. We have endured one blow after the next. Seeing your barn burn down is every farmer's worst nightmare. The winds were strong that morning, and we were so afraid it was going to spread to the calving barn, or even worse, to the milking parlor. We are incredibly thankful that it didn't.

We are now operating in survival mode, and we try to remind ourselves that no life-altering decision should be made during a crisis. We’re focusing on trying to pace ourselves for the marathon ahead.