'The Wonder Grass' a Fascinating Examination of Tall Fescue 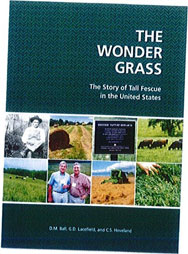 From its origins in Europe,its unlikely beginnings in the United States,the controversy surrounding its initial release and issues with fescue toxicosis,"The Wonder Grass" is a fascinating examination of the history and modern uses of forage tall fescue.

The book was written by former A uburn University Professor Don Ball, former University of Kentucky professor Garry Lacefield and former University of Georgia professor Carl Hoveland. It takes a comprehensive l ook at the species, starting with how in 1 893,a farmer in the mountains of eastern Kentucky noticed that a grass on his farm remained green during cooler months when most other plants were dormant and brown.

"It was a perennial,it persisted well, and his cattle readily ate it," the authors write of that first discovery of what would later become Kentucky 3 1 tall fescue.

The authors attribute much of the species' initial popularity to the work of William Johnstone, who served as a Uni versity of Kentucky extension agent and statewide field agent in agronomy between 1 923 and 1952 and who encouraged its use on Kentucky farms.

"It became cl ear to William Johnstone that tall fescue offered just what farmers needed: wide adaption,easy establishment,dependability,a long growing season,grazing tolerance,suitability for use as either a pasture or a hay crop,as well as suitability for stockpiling," the authors write. "Because of these many advantages,it eventually came to be widely referred to as The Wonder Grass."

The authors devote several pages to the controversy that surrounded the original rel ease of the variety. A nd they take a close look at a subsequent issue, which was given the name fescue toxicosis and which for many years stumped researchers as to why cattle that fed on tall fescue came down with certain maladies,including "summer slump," which resulted in poor weight gain and low reproductive efficiency.

In the epilogue, the authors write: ''The rich and interesting history of this grass in the United States is unique and multi-faceted,and it explains an important development in American agriculture.... Tall fescue has had an astonishing impact on our nation. It is,indeed,a Wonder Grass!"

"The Wonder Grass" was published earlier this year by the Oregon Tall Fescue Commission. To purchase the book,go to www.oregontallfescue.org/wondergrass or call the commission at 503-364-2944.