The phenomenon of the farm kid education

Many of life’s best lessons are learned growing up on a farm. 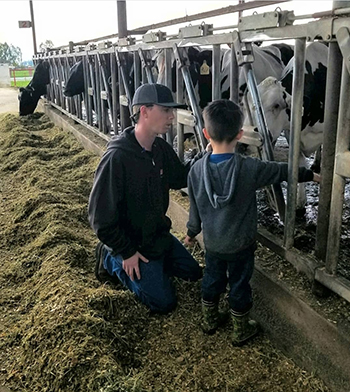 It’s an interesting phenomenon, really, to raise kids alongside animals. The Oxford Dictionary defines a phenomenon as “a . . . situation that is observed to exist or happen, especially one whose cause or explanation is in question.”

We say phenomenon in passing with little thought to the word, much like some take for granted the opportunity and experience farm kids have growing up around animals and crops. This phenomenon is definitely in question, but I’m here to answer.

Growing up on the farm, I learned history. From the beginning, I learned how the cows became part of our lives and the years of hard work it took to keep the cows in the family. I was taught that generations before me forged the path that my family’s future lies on. I was taught about the endless sacrifices that were willingly endured in order to ensure a better future for the next generations.

I learned communication. Even though there are three to four different languages spoken on the farm at any given time, I learned how to talk to everyone. I learned that even though we all may be different in color and culture, we can still work together as a team.

I learned respect. I learned that respect is earned and not given. I know how to say “Yes sir” and “Yes ma’am.” I learned how to hold the door open for others and give up my seat on the bus or the shirt off my back for another in need.

I learned grit. After years on the farm, you learn that giving up is not an option and work is not a spectators’ sport. I learned that even though life may seem to be too much at times, I can fight my way through anything. The work is tough and so is life, but because of it, so am I.

People question if raising kids on the farm is right, and I’m here to tell you: