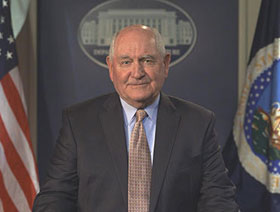 “Repealing the WOTUS rule is a major win for American agriculture. The extreme overreach from the past Administration had government taking the productivity of the land people had worked for years,” Secretary Perdue said. “Farmers and ranchers are exceptional stewards of the land, taking great care to preserve it for generations to come. President Trump is making good on his promise to reduce burdensome regulations to free our producers to do what they do best – feed, fuel, and clothe this nation and the world.”

One of President Trump’s earliest acts in office was an Executive Order directing EPA and the Army Corps to review and potentially replace the Obama Administration’s definition of the “Waters of the United States.” The EPA and the Army Corps have repealed the 2015 Rule that impermissibly expanded the definition of “Waters of the United States” under the Clean Water Act. The agencies upcoming action will restore the regulatory text that existed prior to the 2015 Rule and will end the inconsistent regulatory patchwork that has created uncertainty and has hindered projects from moving forward that can benefit both the environment and the economy. The repeal remedies the legal and procedural deficiencies of the 2015 Rule, addresses the extensive litigation surrounding it, and recodifies and restores a regulatory process that has been in place for years. The new rule will provide regulatory certainty to our nation's farmers and businesses as to the definition of “Waters of the United States.”