Responding to the hate

Keep telling your stories, and do it with kindness. 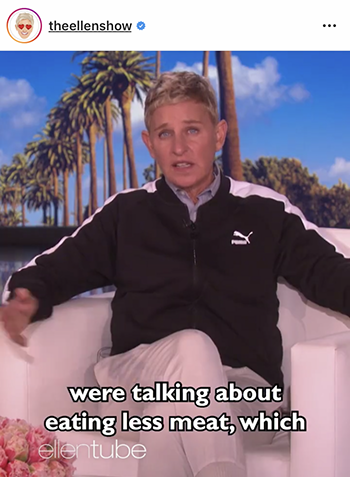 Last week, one of the most beloved celebrities told Americans that we should stop eating meat. Ellen DeGeneres doesn’t just preach to her audience to be kind to one another, she is kindness. So, when she tells people that eating meat is bad for the environment, their health, and the animals, there’s a decent chance that they’re going to listen. Ugh.

As farmers who know differently, how are we supposed to respond? How do we try to convince anyone, let alone her millions of followers, that none of that’s true? The answer is one that I think Ellen herself would approve of . . . with kindness. Yelling at people in the comments section doesn’t help; it could actually hurt.

Have you ever watched an argument unfold on a post and think, “Man, these people are idiots?” Well, even when it is farmers representing the truth against animal activists, we’re the idiots. The people watching don’t know who to believe. You can post photos of you being kind to your cows or even reference multiple research articles claiming the exact opposite of what she said. No matter what you do, you just come across as an idiot arguing with other idiots on Instagram.

We can still fight back. Option one, you could ignore it. Keep sharing your life and how well you take care of your animals and farm. Option two, you could combat it with the truth. Celebrities live a charmed life. It’s easy to tell millions of people that they should become vegan when your personal chef is seeing to all of your dietary needs.

The truth is that most Americans can’t afford to become vegans. Not only because it’s crazy expensive, but because we don’t have time to make sure we’re getting the food we need to stay healthy without densely packed nutrient powerhouses like meat, milk, or eggs. It’s almost laughable to think that people who make their living off the land wouldn’t know how to take care of it. If we ruin the environment, we’re not just endangering our health or the beauty around us, we’re literally ruining our lives.

Also, I will never be able to take sound environmental advice from a person who lives and works in Los Angeles. I’m just saying. Lastly, you know what? Cue the three-minute Lion King inspired musical number, because yes, animals must die so we can eat meat. It’s the circle of life. But that doesn’t mean they’re not taken care of until the end. I bet our animals live better than the half a million homeless people in our country.

I still love Ellen, how could you not? I can’t even blame her for using her platform to push her beliefs because I would do the exact same thing. Maybe we just need to work a little harder at remembering that fame doesn’t make you smarter; it just makes you louder. I’m pretty sure Abraham Lincoln tweeted that.