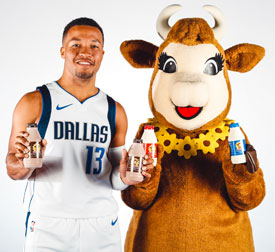 Borden, one of America’s favorite dairy companies founded in 1857, has entered into an official partnership with the Dallas Mavericks and American Airlines Center in an exciting move to bring venue guests nutritious options for game and event nights. As part of this partnership, the AAC will now sell milk for the first time ever.

“The Mavericks are a beloved team that we are proud to support,” said Borden Chief Marketing Officer Joe DePetrillo. “Their games offer fun, positive energy for the whole family, and we are eager to enhance the fan experience.”

Borden milk products can be found at Pizza Hut concession stands, the Market To Go food stand and Valor Bar & Burger. For those craving something a bit more indulgent, the Valor Bar & Burger will be serving signature milkshakes made with Borden milk.

In conjunction with the partnership, Borden will offer exclusive fan experiences, including the opportunity to take a Mavericks player to school, serve as a Borden Milk Honorary Co-Captain at the games, or take home their very own Borden growth chart featuring a Mavericks player.

“The Dallas Mavericks are thrilled to welcome Borden to the partnership family, and the fact that they are based in Dallas is even more exciting. There are so many great aspects to this partnership, including Borden’s commitment to the Dallas community and exclusive experiences for Mavs fans, that we cannot wait to get started,” said Dallas Mavericks CEO Cynt Marshall.

Fans can stay tuned for details on Borden and Mavericks initiatives by following @BordenDairy on the company’s social media pages.

About the Dallas Mavericks

The Dallas Mavericks are a first class global sports and entertainment organization providing memorable experiences for fans worldwide. The Mavs compete in the National Basketball Association as a member of the Western Conference and play at American Airlines Center under the direction of Coach Rick Carlisle, General Manager Donnie Nelson, CEO Cynt Marshall and Owner Mark Cuban. Since the inaugural season in 1980-81, the Mavs have won three division titles, two conference championships and one NBA championship in 2011. In addition to on-court success, the Mavs are committed to making a difference in North Texas through outreach programs and the Mavs Foundation. For more information on Dallas Mavericks players, staff, stats and tickets, visit mavs.com.

Founded in 1857 by Gail Borden, Jr., Borden is a heritage American brand that produces more than 35 wholesome and delicious products enjoyed by millions of people every day. Borden was the first company to develop a patent for the process of condensing milk, as well as the first company to use glass milk bottles. In 1936, Elsie became America’s favorite spokes-cow, and was recognized in 2000 by AdAge as one of the top 10 advertising icons of the 20th century.

Today, Borden is headquartered in Dallas, and operates 13 milk processing plants and nearly 100 branches across the U.S. that produce and distribute nearly 500 million gallons of milk annually for customers in the grocery, mass market, club, food service, hospitality, school and convenience store channels. The company’s People First culture has inspired decades of loyal tenure among hundreds of the 3,300 people Borden employs. In 2019, Borden landed the No. 16 spot on Forbes’ list of America’s Most Reputable Companies, highlighting the company’s well-earned trust amongst consumers. For more information, visit bordendairy.com.