Scientific evidence shows that lowfat chocolate milk used as a recovery drink helps repair and rebuild muscles after strenuous exercise because of its 3:1 carbohydrate-to-protein ratio. Chocolate milk is also a source of B vitamins that help convert food to energy.

ADA North East also has a sponsorship with the New York Yankees to help fight the increasing rate of childhood obesity. By joining forces, Refuel with Chocolate Milk sponsored Yankee youth baseball summer camps in 13 towns to reach youth with milk’s important nutrition information, and specifically hosted 80 youth from the Bronx to participate in the camps. 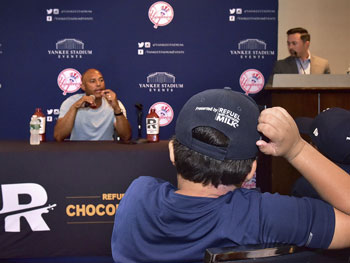 In addition, Yankees Manager Aaron Boone recorded a public service announcement about the Summer Meals program in New York City that provides children access to healthy foods and dairy products when school is out for the summer months. Boone also provided a signed Yankees jersey offered in a drawing for those who shared the Facebook post with the PSA.