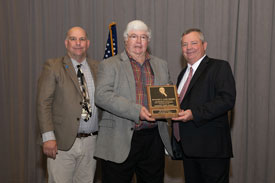 Bill Siebenborn Receives Award
The National Dairy Promotion and Research Board (NDB) honored William “Bill” Siebenborn as the 2019 recipient of the Richard E. Lyng Award for his contributions and distinguished service to dairy promotion.

The award is named for former U.S. Department of Agriculture Secretary Richard E. Lyng, who played a critical role in implementing policies that led to the establishment of NDB more than 30 years ago. The Lyng Award honors leaders who have made a significant contribution to dairy promotion that benefits the entire industry.

“This award celebrates farmers who have shown a long-standing dedication to dairy promotion, including serving as a leading advocate for dairy foods, dairy farmers and the dairy community,” said Brad Scott, California dairy farmer and chair of the NDB. “Bill has dedicated more than 30 years working to make a difference for dairy farm families.”

Siebenborn served as chair of the UDIA, a federation of state and regional organizations that work to implement local checkoff-funded programs, for 10 years. During this time, he played a key role in guiding the federation to develop and adopt programs that helped protect and grow sales and trust in dairy, including partnerships with national foodservice companies and the school-based Fuel Up to Play 60 program, which works to create healthier school environments based on physical activity and healthy eating, including dairy.

Beyond dairy promotion, Siebenborn also served in leadership roles on other farmer-led organizations, including Dairy Farmers of America, the Missouri State Milk Board, NMPF, Hiland Dairy and Midwest Dairy Association.

“Bill represents the best of farmer leadership,” Scott said. “From representing farmer interests on numerous national and regional boards to the work he continues to this day mentoring young farmers relative to dairy farming and promotion and cooperative organizations, Bill’s dedication will make a difference long into the future.”

As part of the Richard E. Lyng Award, the NDB will contribute $2,500 to the University of Missouri (Columbia) College of Agriculture in Siebenborn’s name.

For information about the dairy checkoff, visit www.dairy.org.

The 38-member National Dairy Board, formed in May 1984 under the authority of the Dairy Promotion Stabilization Act of 1983, carries our coordinated promotion and research programs to help build demand, and expand domestic and international markets for dairy products and ingredients. NDB funds, in part, Dairy Management Inc.™, which manages the national dairy checkoff program.