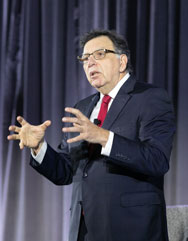 Tom Gallagher
Dairy Management Inc. (DMI) CEO Tom Gallagher told more than 800 dairy farmers and industry representatives that to thrive in the future, industrywide unity and leadership will become more important than ever.

This is crucial as anti-animal-agriculture groups pose a growing threat to the dairy industry by working to eliminate the checkoff, Gallagher said during his address at the 2019 joint annual meeting of the United Dairy Industry Association, National Dairy Promotion and Research Board and National Milk Producers Federation in New Orleans.

Gallagher provided a foundation for why he believes the checkoff has become a target of these groups, explaining how USDA data shows per-person dairy consumption has grown by 73 pounds since the dairy checkoff began in 1983. He said DMI’s mission is to not only grow sales but to build consumer trust by sharing how farmers care for their animals, land and employees.

But groups that oppose animal-based food production, he said, are looking to erode and eventually eliminate the checkoff, knowing it is the last line of defense between farmers and consumers.

“Make no mistake, they only have one goal: to eliminate all animal agriculture in this country,” Gallagher said. He said these groups seek to create a division among U.S. dairy farmers based on factors such as their size or production style and that they are “infiltrating consumer trust.”

“We’re done taking it,” he continued, urging farmers at the meeting to share these groups’ agenda with their peers around the country. “These anti-animal agriculture people aren’t going to defeat you.”

DMI President Barb O’Brien followed Gallagher with an overview of the unified marketing plan’s seven strategic areas to drive sales and trust. She said the collective efforts prove dairy remains a powerful category with more than $100 billion in annual retail sales and that household penetration of dairy is strong. She cited consumer research showing cheese is in 98 percent of U.S. homes and milk is in 94 percent.

“This puts to rest the naysayers’ claim that dairy is dead,” O’Brien said. “Dairy is alive and well and in households across the country.”

“The issues facing milk are not about consumer awareness,” she said. “You can’t look at those household penetration numbers and say consumers aren’t aware of the category. The issues were more fundamental and required working with the middle of the chain, with co-ops, processors and retailers, who controlled the product and how it went into market.”

As a result of this work, O’Brien said there has been cumulative new product sales of 1.3 billion pounds of milk resulting from checkoff partnerships with companies such as Darigold, Shamrock, fairlife, Kroger and others. O’Brien emphasized the fluid milk work continues and said DMI is teaming with MilkPEP on an effort that is targeting the country’s top 10 retailers. Among its goals is to assure dairy’s rightful place in retail coolers across the country.

“What we want to do is represent (farmers) so you have a voice at the table,” said Paul Ziemnisky, executive vice president of DMI’s global innovation partnerships. “The competitors out there selling against milk are telling retailers to get rid of 4 feet of conventional milk space (in the dairy case), that it’s dead. We went in with Darigold and we met with Albertson’s and showed them the facts and how powerful milk is to them. We preserved our shelf space. That’s what we want to do, to make sure retailers understand the power of dairy.”

Checkoff partnerships such as McDonald’s also have been pivotal in moving more dairy. Divya Reddy, a DMI food scientist who works on site at McDonald’s headquarters, said the chain’s commitment to revitalize its McCafé line of specialty drinks has benefitted dairy farmers. She said 90 percent of McCafé beverages contain dairy and products such as lattes have more than 70 percent milk.

“Dairy is a key ingredient to McCafé,” she said. “We have seen year-over-year growth of fluid milk since the very successful relaunch of McCafé in 2017.”

O’Brien said this work has created a catalytic effect that has led to a 7-percent growth in milk-based coffee beverages across all of foodservice.

Reddy also shared that McDonald’s will be rolling out a 25-percent reduced-sugar, 1-percent chocolate milk nationwide in January that was developed with checkoff support.

Beth Engelmann, chief marketing officer for DMI, highlighted that after two years of engaging consumers with the Undeniably Dairy campaign, results are being achieved in long-term trust measures.

“With 350 dairy companies and organizations participating in Undeniably Dairy, we have been able to generate over 5 billion media impressions for content that is sharing dairy farmers’ stories,” she said. “That reach has translated into positive movement – a 6- to 8-point increase in consumer trust in dairy farmers and in their commitment to taking care of the land and their animals. And, we are also seeing an increase in their belief that dairy is superior to plant-based protein.”

On the meeting’s final day, Tom Vilsack, president and CEO of the checkoff-founded U.S. Dairy Export Council (USDEC), moderated a panel discussion on global opportunities for exports. Vilsack shared that at the end of September, the U.S. was about $970 million ahead in sales as compared to the same point in 2016.

Marilyn Hershey, a Pennsylvania dairy farmer and chair of DMI, said the work of USDEC is critical to dairy farmers.

“We’re in a global market and if we don’t compete globally, we’re going to hurt ourselves in the long run,” she said. “As a dairy farmer, we know there is tremendous value in helping to get our products into other countries. You look at exports and the percentage moved and that would have been extra milk in our market.”

As Gallagher concluded his presentation, he urged the need for all farmers, regardless of their size or farming style, to remain united.

“Unity doesn’t mean don’t question, don’t challenge, don’t ask the hard things,” he said. “This room represents thousands of farmers who have elected you to co-op boards, national milk boards, promotion boards. Yeah, let’s argue, let’s disagree, but let’s do it together and when we make a decision, let’s go and let’s not let the activists divide us. Through unity and leadership, we will secure a strong future for dairy.”

Dairy Management Inc.™ (DMI) is funded by America’s nearly 37,000 dairy farmers, as well as dairy importers. Created to help increase sales and demand for dairy products, DMI and its related organizations work to increase demand for dairy through research, education and innovation, and to maintain confidence in dairy foods, farms and businesses. DMI manages National Dairy Council and the American Dairy Association, and founded the U.S. Dairy Export Council, and the Innovation Center for U.S. Dairy

Nebraska Dairy Industry to Convene in Columbus for Annual Convention

A survey on milk premiums paid to dairy farmers wants your input.
comments powered by Disqus