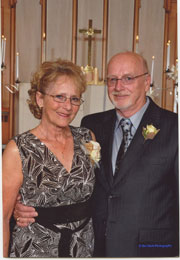 Bill and Carolyn Henderson
Keeping things in the family and carrying on a decades-old tradition is a big reason for the continued success of a Delphi, Indiana-based company that has been a favorite of livestock producers since the early 1980s.

American Agra Curtains, a manufacturer of textile products for livestock barns, particularly insulated curtains for swine, dairy and poultry operations, was founded in 1983 by Bill and Carolyn Henderson. Bill Henderson said as a former builder of such facilities, he had a conversation with a hog farmer that sparked the idea for the company that today provides curtains for livestock producers world-wide.

He said to me ‘I’d have one of those naturally-ventilated buildings if I could get an insulated curtain on it,’” remembers Henderson. “So, it really was the farmer who had the idea.”

Bill said he went home and ran the idea past his wife, Carolyn, an accomplished seamstress. “She had some ideas on what kind of material to use because she was used to using material and we just put it together.” Not long after the couple’s first effort at making hog barn curtains was installed, the product was put to the ultimate test. 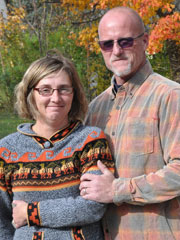 Brian and Jerri Henderson
“We had cold snap after we put it on his building and he was so happy because in his old building — the one that wasn’t insulated — every water line in the place busted and none of them busted in the new building.” The Hendersons received a patent for their insulated curtain, named Mar-Co-Lite, and through word of mouth, demand for the new product grew into the company that today provides curtains and other products to many of the world’s top producers. In December, 2018, Carolyn lost her battle with cancer, causing the family to regroup and develop a strategy for the future. Brian and Jerri Henderson, a son and daughter-in-law of the couple, were made the company’s new owners with Bill still overseeing some of the day-to-day operations. Jerri was named president and Brian managing owner. According to Jerri Henderson, the recipe developed by Carolyn when the company began in 1983 will continue to be the company’s roadmap for the future.

“I worked here when Mom was here and when she got sick and couldn’t be here, I took care of her,” said the new company president. “She was really good at it. She was a leader. She was the oldest of 10 children and that being said, when you’re the oldest, a lot falls on you. I would say Mom ran this business very well and a big part of her success was her insistence on top quality, having a product that is 100 percent American made, and her relentless dedication to customer service.” The company is branching into other products such as recreational vehicle skirting, bird barriers for the poultry industry and room dividers for numerous industrial purposes.