All creatures great and small

Nurturing an animal back to health can be therapeutic for the caretaker, too. One of our heifers, Sharon, was badly injured last summer.

The last day of July I received a phone call from my husband, Scott, that one of our off-site heifers was injured. He needed help figuring out what to do with her. She had been temporarily moved to an off-site farm after our heifer barn burned down this summer.

The injury was pretty traumatic. Somehow the heifer, Sharon, caught herself on a piece of rebar and cut herself badly.

Scott said he couldn't put her down because, although she was badly injured, she had the will to live. We decided to load her on the trailer and take her to a nearby vet clinic that sutured her up.

She came home and went in the shed behind our house. I offered to help take care of her, and during that time, it quickly became evident that this calf was my therapy calf. I would talk, and Sharon would listen; this is reason 1,000 why I just love cows. Many times, the conversation was just me sitting next to her, crying. Sharon understood. We both had been through a lot. 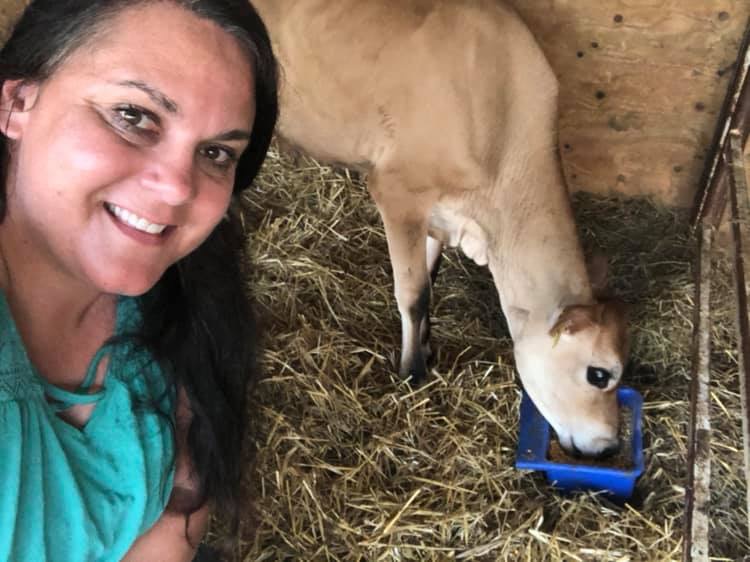 Sharon became my therapy calf. I'm quite certain that cows are sometimes the best listeners.

Over the last four months, we have had a lot of "talks." Although Sharon will always have a massive scar, she has healed. Last week, my husband moved her out of the "therapy pen" and into group housing. I'll be honest, I kind of panicked. While Sharon's scar is more evident than mine, she was quicker to heal. I told Scott I still needed her in my shed.

He told me, "Well, some just heal quicker than others." And, truthfully, that is how it goes.

So, if you are going through a tough time with grief, with loss, with an overwhelming tough year—extend some grace to yourself. Don't compare yourself to your neighbor who seems to have it all figured out. Don't compare yourself to your sibling who is smiling wider than you. If you are like me, we are on a road to recovery, and that road, my friends, is as long as you need it to be.

My only advice is that on really crummy days, find your favorite cow and give her a good head scratch. I promise you that it will help heal a piece of your heart. At least, Sharon did that for me on my toughest days this past summer.