Korte, Schmitz new faces on the board of directors 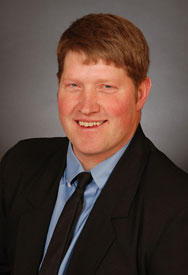 Von Ruden is a lifelong Farmers Union member, and since 2008 has served as the organization's District 5 director, representing Crawford, Grant, Green, Iowa, Lafayette, Richland, Rock, and Vernon counties. He also leads the WFU Foundation Board of Directors, serves on the National Farmers Union Board and is chairman of the NFU Membership Committee. Darin and his wife, Joann, live in Westby. The Von Ruden family recently transitioned the farm to the fourth generation, when their son Brett purchased the machinery and 50-cow dairy herd.

Von Ruden has been active with Farmers Union at the local, state and national levels. He is a seven-time recipient of the Silver Star Award, which is National Farmers Union’s highest recognition of membership development. A patron member of the Westby Cooperative Creamery, he was also a founding member of Wisconsin Farmers Union Specialty Cheese, chairman of the Wisconsin Dairy Farmers Guild and a founding member of the Upper Midwest Milk Producers Association. He is a past delegate to the Farmers Union Marketing and Processing Association, and in 1996-1997 was a member of Gov. Tommy Thompson's Cheese Pricing Task Force. In recent years, he has represented U.S. farmers as a delegate at World Farmers’ Organisation, on the Dairy Task Force 2.0, and as a strong advocate for fair prices for family farmers with the Dairy Together campaign.

Von Ruden is the 11th president in WFU's 88-year history. He divides his time travelling between the WFU state office in Chippewa Falls and its legislative office in Madison.

In his presidential address, Von Ruden highlighted his hopes for the year, one that he noted will have rural Wisconsin in the spotlight as American turns its eyes to Wisconsin as a key election battleground state. “This national attention will create opportunities to carry out our Farmers Union values and call for stronger democracy, fair maps, a stronger role for farmers in shaping climate change and water quality policy, greater awareness of monopolization in agriculture and, last but not least, the need to restructure agriculture with sound policy that ensures family farmers have a shot at fair prices,” he said. 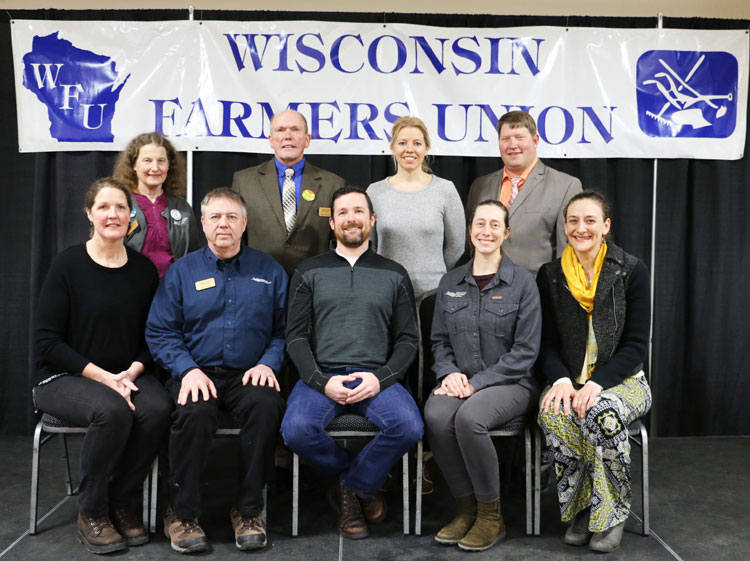 Schmitz replaces outgoing director Craig Myhre, who was elected to the board in 1996 and represented Buffalo, Jackson, La Crosse, Monroe and Trempealeau counties. Schmitz, who resides in Cashton, grew up on a Monroe County dairy farm, was active in 4-H and FFA, and earned undergraduate degrees in Dairy Science and Agricultural and Applied Economics. She is an avid volunteer, has 17 years of experience working for CROPP/Organic Valley, and is the chair of River 2 Ridge Disaster Resilience, a long-term recovery group of organizations and individuals in Vernon, Crawford, Monroe, and LaCrosse counties that was created to meet unmet resident needs after a disaster or community crisis. Schmitz has recently returned to farming, and in 2019 harvested her first hemp crop. She plans to plant 1-2 acres of hemp in 2020, starting seeds and clones indoors, and harvesting with others. She looks forward to continuing to realize the potential for hemp fiber.

Schmitz noted she appreciates the diversity of people in Wisconsin Farmers Union and the active participation and conversation that addresses complex issues in agriculture. “The emphasis on using governance and conversation further ignites my realization of the value of uniting our sweat equity as farmers/growers and supply chains to deliver farm goods to consumers,” she said.

Korte has been a longtime Farmers Union member. An active member in high school and college, she gained many unique leadership experiences, such as traveling to Washington, D.C. to lobby for passage of the 2014 Farm Bill. After attending law school and practicing law in the Twin Cities for a few years, she returned to rural life and WFU two years ago and became the president of the Chaseburg Local Chapter.

Korte grew up on an organic dairy farm. Today, she and her husband, Nicholas, raise chickens, beef, and Gloucestershire Old Spot hogs on their Chaseburg farm. They are transitioning the 19 acres of tillable land from conventional corn and soybeans into organic pasture and are restoring overgrazed ridge pastures by planting hazelnut, apple, and hickory trees. As an attorney licensed to practice law in Wisconsin and Minnesota, Korte assists with farm transition planning, helps entrepreneurs form new businesses, and defends local control.

“We cannot do anything more valuable for our society than spread the message of local democratic control and the morality of good, humane, fair food,” Korte said. “Wisconsin Farmers Union is an amazing non-partisan example of small groups of people from a large geographic area with diverse backgrounds working together for a common noble goal.”

Wisconsin Farmers Union, a member-driven organization, is committed to enhancing the quality of life for family farmers, rural communities, and all people through educational opportunities, cooperative endeavors, and civic engagement. For more information visit www.wisconsinfarmersunion.com.