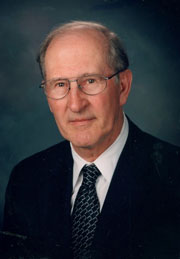 Dr. A.E. “Gene” Freeman
It is with sadness that the Animal Breeding, Genetics and Genomics Group at Iowa State University report the passing of Dr. A. E. (Gene) Freeman on March 21, 2020. A full accounting of Gene’s many outstanding contributions can be found at “The Contributions of A. E. Freeman” by Ronald E. Pearson at Journal of Dairy Science: https://www.sciencedirect.com/science/article/pii/S0022030201701932 and in an interview of Dr. Gene Freeman by Dr. Jack Dekkers: https://mediacommons.unl.edu/luna/servlet/detail/UNL~116~116~75~1463278:Interview-with-Dr--Gene-Freeman.

Dr. A.E. “Gene” Freeman was born in 1931 and grew up on a farm in Lewisburg, West Virginia, with a 30-cow Jersey herd. He attended West Virginia University in 1948 and completed his B.S. in 1952 and his M.S. in 1954 with R. S. Dunbar, Jr. Gene then attended Cornell University for his PhD under the direction of C. R. Henderson in the Animal Science Department, which he completed in 1957.

Gene became an assistant professor in the Animal Science Department at Iowa State University in 1957. Iowa State was to be his academic home for his entire career, except for two sabbaticals. Over his 43-year career at Iowa State, he progressed through the ranks (1961, Associate Professor; 1965, Professor; 1978, Charles F. Curtiss Distinguished Professor of Agriculture; and 2000 Professor Emeritus). His beginning years at Iowa State were devoted to undergraduate teaching and cooperative research with a wide variety of faculty and students. As time progressed, he initiated a more active research program that focused on dairy cattle breeding. His mentoring of graduate students began in 1960 with Joe Hillers and the late Don Butcher.

It is not an overstatement to say that for the next 40+ years, Gene made his mark in animal genetics and dairy cattle genetics in particular. He was an extremely productive mentor of dairy genetics graduate students and was a prolific author of abstracts and of research and popular press articles on dairy cattle breeding. Gene’s contributions to dairy cattle breeding and genetics were summed up by his former graduate student Ron Pearson and include: 1) his students; 2) the research he conducted and guided; 3) his counsel to various industry groups and to the academic community; and 4) the leadership he provided to industry and academic groups and organizations.

Gene served as the major advisor for 55 graduate students in animal breeding who received 32 M.S. and 40 Ph.D. degrees. He also served on the committees of numerous other graduate students. Approximately 30% of his students were from outside the United States. Over half of his 55 students hold or have held university faculty positions, and others hold important technical positions in national genetic evaluation units, with various AI organizations, and other industry organizations that involve improvement of germ plasm. A growing number of these students have received university and national awards in teaching and research. As a major professor, Gene was generally close to his students. He interacted with them at both a social and intellectual level and generally treated them as colleagues. He provided strong encouragement and help where necessary. Once they graduated, Gene continued to open doors for his former students. He was a mentor, a colleague, and a friend. In addition to his own graduate students, Gene served as mentor to numerous visiting scientists (postdoc and sabbatical) and students.

Gene Freeman’s contributions to research were considerable (see review by R. Pearson). Much of the focus of this research was on current and expected problems and opportunities that were or would be encountered by the dairy cattle breeding industry. This research program represented a variety of research approaches, including planned experiments, analysis of field data, field studies, simulation, and theoretical studies, and involved associations with numerous other disciplines. During his entire career at Iowa State University, Gene maintained a designed dairy cattle breeding project with the dairy research herd at Ankeny, Iowa, and for some time also with the dairy teaching herd at Ames. The Ankeny herd was well used and produced many outstanding research results useful for industry. Because of this research, Gene was an invited speaker at many symposia and other professional meetings in the United States and around the world. One aspect that varied little over time was his focus; the vast majority of Gene’s research was on practical problems related to genetic improvement of dairy cattle. Gene was an active collaborator and attracted researchers from diverse areas to cooperate with him on innovative research. Industry supported his efforts, and he freely offered his advice and counsel in any area that industry might find useful. Gene served as a resource for most dairy cattle breed associations and AI studs in the United States and a number outside of the United States. He also served on a number of substantive committees of the National Association of Animal Breeders and its affiliate organizations. Gene loved to discuss ideas and, as his colleagues and students may remember, he would often say “talk is cheap, it takes money to buy whiskey”.

During his tenure at Iowa State, Gene provided significant leadership to the Animal Breeding Group at Iowa State. He also was an enthusiastic supporter and leader within the NC-2 and subsequent multistate regional research projects in dairy genetics. He provided leadership to the American Dairy Science Association (ADSA) through its editorial board, dairy cattle improvement committee, production division, and board of directors. He served as a member and President of the board of directors for the World Congresses on Genetics Applied to Livestock Production.

In recognition of his many accomplishments, he received numerous major awards from a variety of organizations including: National Association of Animal Breeders Research Award (ADSA), Rockefeller Prentice Memorial Award in Animal Breeding and Genetics (ASAS), Borden Award for Outstanding Research in Dairy Science (ADSA), Gamma Sigma Delta Award of Merit, ADSA Distinguished Service Award, J. L. Lush Award in Animal Breeding and Genetics (ADSA), Distinguished Alumni Award from the College of Agriculture of West Virginia University, Faculty Citation Iowa State University Alumni Association, Fellow of ASAS, Fellow of the American Association of the Advancement of Science, Fellow of ADSA, and the ASAS Morrison Award, which is the top research award in ASAS. In 2001 he was honored with the Guest of Honor recognition by National Dairy Shrine and entered the National Dairy Hall of Fame.

Recently, in honor of Gene, several of his former graduate students established the “Dr. Gene Freeman Graduate Student Travel Fund in Animal Breeding and Genetics” at the Iowa State University Foundation. The purpose of this fund is to help students attend professional meetings and conferences and emphasizes the important role those experiences play on career development, in recognition of the important role that Gene filled for his students in allowing them to attend similar events. Additional donations to this fund can be made by direct contributions to the ISU Foundation or the department with the fund’s name.

A memorial service is being planned.