Milk Crisis Plan- Needs a Fix to A Flaw

ADC applauds the hard work of NMPF & IDFA in pulling together the Milk Crisis Plan, but a very important change is needed by USDA to ensure the true intention of the milk production decrease program actually reduces supply.

Every player in the dairy supply chain — producers, processors, retailers and affiliated industries — is scrambling to avert the industry’s collapse in the shadow of COVID-19.

Much about it deserves applause: It bluntly assesses the upheaval caused by plunging restaurant and school sales and rocketing grocery store demand. It also seeks to align the supply/demand gap as quickly and efficiently as possible.

However, among its “producer initiatives” is a fatal flaw that could spur more market disruptions than it resolves: It proposes to pay dairy producers $3 per hundredweight on 90 percent of their production — if they cut production by 10 percent from a March 2020 baseline.

Unfortunately, the arbitrary March benchmark will not work. For the dairy industry to have a meaningful and market-effective impact, production needs a different baseline — it must be seasonally adjusted and region specific.

Dairy production traditionally drops during the nation’s warm weather months, so supply numbers are already sloping downward and are baked into production estimates. Asking producers to trim 10 percent from their March numbers would essentially mean little to no change in the nation’s milk product inventory, as that amount already is built in.

In addition, a one-size-fits-all proposal fails to account for the geographic differences built into the industry. For example, an Arizona dairyman already produces 10.1 percent less during the proposed subsidizing period (see the attached chart.) As such, the current proposal merely subsidizes the normal curve. 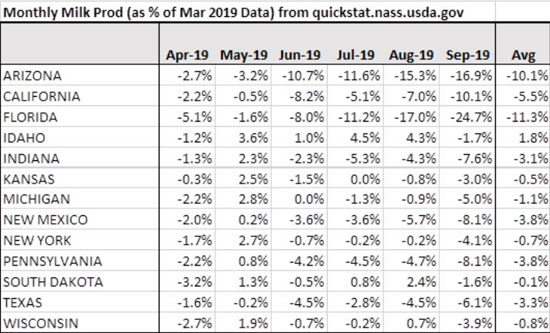 Using the March baseline would lead to an insufficient decrease in milk inventory — one that does not account for market conditions. In the process, it would create more disruptions, not less, as the nation’s surplus would essentially remain in place.

A seasonally-adjusted, market-specific milk reduction — which takes into account the summer downturn and then trims dairy production beyond it — will prove far more effective in realigning farm supply with current consumer demand.

In rapidly launching their Crisis Plan, the NMPF-IDFA warn “we cannot let the perfect be the enemy of the good.” Dairy farmers and processors don’t expect perfection, but we desperately need a program which will reduce the rising milk supply to prevent additional dumping of milk.

The American Dairy Coalition appreciates the hard work NMPF and IDFA have done to accomplish this Milk Crisis Plan for the USDA, but we must fix this flaw so that our nation’s dairy producers can begin healing from this horrific nightmare.