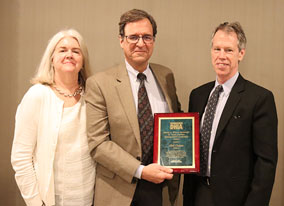 Kit Dukas, Phil Dukas, and John Clay
Phil Dukas was honored with National DHIA’s Distinguished Leadership Award at the 2020 NDHIA meeting in Savannah, GA, after dedicating more than 43 years to the dairy industry. Phil recently retired as Assistant Director of DRMS where he led PCDART and PocketDairy software and DHI data processing development efforts. DRMS Director John Clay presented the award and chronicled Phil’s influences over a long career that significantly impacted the dairy industry and DHIA in particular.

As the Assistant Manager of Virginia DHIA (1979-1981), Phil trained DHIA technicians, helped producers adopt SCC results into herd management, and was an early implementer of lab networking. As the first General Manager of Pennsylvania DHIA (1981-1983), Phil led the transition from Extension-based management to regional managers, and laid the foundation for the Pennsylvania DRPC.

In 1983, Phil was hired as the Director of Technical Development and Director of Operations for NDHIA where he inte¬grated RFID into DHIA, certified the first six electronic meters on the US market, initiated the association of NDHIA with ICAR, and developed DHIA Services, a NDHIA subsidiary.

Six years later, Phil became CEO of NDHIA (1992-1997). By working with DHIA leaders, AI and breed associations, Phil facilitated a change to halt DHIA’s role as the policeman of dairy record keeping to one that focused on profitable herd management for US producers. Phil also helped NDHIA provide a forum and support the changes to allow DHIA affiliates to operate beyond historical state lines.

Phil was Interim Manager of NorthStar DHI for two years (1997-1999) and helped with the foundational work to strengthen the unique collaboration of DHIA with AI that now serves a large base of producers in the upper Midwest. Then, after a producer showed Phil a list of cows he had loaded in a Palm Pilot, Phil began working on PocketDairy for cow-side management. This was a mark of Phil’s brilliance. He saw a good idea and turned it into something ground¬breaking. He showed his idea to John Clay at DRMS, and PocketDairy became the first full-featured dairy herd manage¬ment product on a handheld. PocketDairy injected a modern, natural connection to on-farm records, helping to modernize the perception of DHIA. About half a million cows are now managed by PocketDairy.

In 2000, Phil was hired to direct software development efforts at DRMS. For 19 years, Phil brought his insights and inclination to innovate to the DRMS development process where he impacted the central processing system; software enhance¬ments; interfaces with automated milking, heat monitoring and robotic systems; and facilitated a vibrant development effort for DRMS producers.

Phil’s passion for the dairy industry and the dairy producers always shone through in everything he did. He frequently told his DRMS colleagues that, “When I was a dairyman in VA, I was able to completely change this herd’s performance with my DHIA data. It’s great stuff.” Aside from his great industry accomplishments, he has also been a great mentor and friend to many. Congratulations to Phil for this great achievement and for his selfless contributions to our industry.