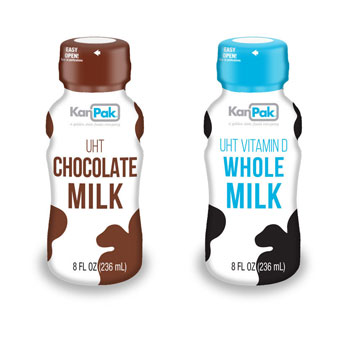 "I saw on TV that they were throwing milk away, and I thought that was crazy," said Larry McGill, Corporate Vice President, GSF and Chief Executive Officer, KanPak U.S. "I knew that there had to be something that we could do to help."

Just as dairy cows approached the height of their milk production season over the past two months of spring, farmers have dumped excess milk due to rapid, unexpected changes in supply chain demand. As part of the food supply chain, GSF feeds 5 billion people worldwide every day. Refusing to stand by while surplus food goes to waste and more people go hungry, GSF and KanPak quickly launched a surplus milk bottling initiative and drove remarkable speed-to-market in about a month's time.

New product launches typically take at least three to four months, including regulatory approvals, package design, and quality assurance protocols. From food manufacturing and distribution to nonprofit partnerships and vendor collaboration, KanPak has leveraged expertise, infrastructure, and relationships from across the GSF family of companies and beyond to kick-start its surplus milk supply initiative.

"Second Harvest is incredibly proud and grateful for our partnership with GSF and KanPak," said Harald Herrmann, chief executive officer of Second Harvest Food Bank of Orange County. "Their foresight and innovative mindset have brought aseptic whole milk, which is like protein gold, to our food bank and to the community of people we are humbled to serve."

In addition to Second Harvest, Kansas Food Bank will also receive a milk donation from the first production run, as the first two of many community organizations that KanPak hopes to support. For hunger relief efforts in rural communities, KanPak's individually bottled, shelf-stable milk may be distributed unrefrigerated in handy six-pack quantities directly to those in need. Through first responders and community volunteers, premium milk can now reach far-flung destinations with less access to donated food distribution resources. Not only does this effort serve families in need, but it also keeps KanPak's production plant associates busy making milk and supporting America's economy.