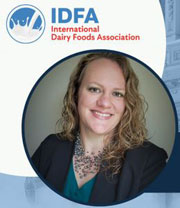 Rasdall comes to IDFA after serving for nine years with the U.S. government, most recently as senior policy advisor for the Foreign Agricultural Service within the U.S. Department of Agriculture. There, she focused on a variety of trade policy issues related to technical and sanitary and phytosanitary barriers to U.S. exports of food and agricultural products, including dairy. Rasdall has extensive experience in trade agreement negotiations, including working on the U.S.-Mexico-Canada agreement (USMCA) as well as the most recent U.S.-China agreement. While on assignment to the Office of the U.S. Trade Representative, Rasdall was part of a team that negotiated the Transatlantic Trade and Investment Partnership (TTIP). Prior to joining the U.S. government, Rasdall managed regulatory compliance for ConAgra Foods’ export business and worked for the International Food Information Council, in addition to a position on Capitol Hill with Congressman Dave Camp (MI).

“It’s been a privilege to serve U.S. farmers and producers in expanding their export opportunities while working for the U.S. government, and now I am excited to join IDFA to continue working toward that end on behalf of the U.S. dairy industry,” said Rasdall. “I am convinced of the tremendous opportunities that exist for the U.S. dairy industry in foreign markets and am looking forward to helping IDFA members meet the growing global demand for American dairy products.”

IDFA’s Legislative Affairs and Economic Policy team, led by Senior Vice President Dave Carlin, manages the association’s legislative, political and economic policy activities, including engagement with lawmakers and policymakers at the federal and state levels; analyzing and developing positions for the industry on issues affecting dairy markets and economics; and overseeing IDFA’s advocacy on rules and policy shaping U.S. trade and exports.

“I am excited to have Becky join IDFA’s policy team,” said Carlin. “Expanding market access for U.S. dairy products is vitally important and with Becky’s years of experience at USDA and USTR, she will be in a strong position to help our members sell more nutritious U.S. produced dairy products to the 95 percent of consumers who live outside of our borders.”

The U.S. dairy industry, which supports more than 3 million jobs in the United States and pumps $620 billion into the U.S. economy, relies on trade agreements to open new markets and increase exports. After being a net importer of dairy products a decade ago, the United States now claims a dairy trade surplus of more than $2 billion and sends American dairy products to more than 140 countries. U.S. dairy exports nearly tripled since the early 2000s, and the United States became the world’s third-largest dairy product exporter behind New Zealand and the European Union (EU). Today, approximately one day’s worth of milk produced each week is exported, or roughly 15% of all production. As U.S. milk production continues to increase over the next decade, new trade agreements will become even more vital to the industry and the American economy. IDFA advocates for continued focus on new trade partnerships and pacts. Moreover, IDFA supports a market-principled approach to trade and advocates for the removal of unfair barriers so that U.S. dairy companies can compete on a level playing field.

Rasdall holds an M.A. in International Relations from the University of Warwick in Coventry, England, and a bachelor’s degree in International Political Science from Hope College in Holland, Mich. She speaks German and Spanish. She begins with IDFA on Tuesday, July 7.

To learn more about IDFA’s work on trade and exports, visit www.idfa.org/trade.