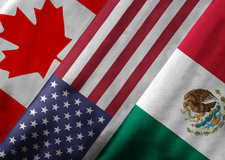 “We are entering into a new era of trade with Canada and Mexico – one that allows U.S. animal food producers to remain competitive, strengthens our regulatory engagement and commitments with our trading partners and lays the groundwork for innovation to meet the agriculture industry’s future needs,” said AFIA President and CEO Constance Cullman. “I commend our countries’ national leaders, particularly the efforts of President Trump and his administration over the past three years, for making this much-needed agreement a reality.”

In an ever-increasing global economy, the United States’ northern and southern neighbors have the largest impact on the animal food industry and on American agriculture. Mexico and Canada represent the country's largest and second largest export markets for feed, feed ingredients and pet food, respectively, totaling $3.3 billion today. Since the North American Free Trade Agreement's (NAFTA) implementation, animal food exports to Canada and Mexico have nearly quadrupled, growing from $669 million in 1993 to $3.3 billion in 2019. While NAFTA was a linchpin in the success of the feed industry for the past quarter-century, the USMCA brings new labor provisions to protect U.S. jobs and provides enforceable sanitary and phytosanitary obligations that build upon World Trade Organization rights and obligations.

Founded in 1909, the American Feed Industry Association (AFIA), based in Arlington, Va., is the world’s largest organization devoted exclusively to representing the business, legislative and regulatory interests of the U.S. animal food industry and its suppliers. The organization’s membership is comprised of nearly 700 domestic and international companies that represent the total feed industry—manufacturers of commercial and integrated feed and pet food, ingredient suppliers, pharmaceutical companies, industry support and equipment manufacturers. AFIA’s members manufacture more than 75% of the feed and 70% of the non-whole grain ingredients used in the country. AFIA is also recognized as the leader on international industry developments, and holds membership in the International Feed Industry Federation (IFIF).