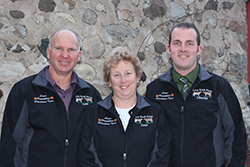 The Brown Swiss Cattle Breeders’ Association recently recognized Cozy Nook Farm of Waukesha, WI as the recipient of two National Awards for their Brown Swiss dairy herd. Operated by Tom and Joan Oberhaus along with their son Charlie, the family has been milking cows full-time since 1985. They have approximately 63 milking Brown Swiss, 65 up-and-coming Brown Swiss heifers and a handful of Guernseys on the farm.

Cozy Nook Farm received the Ira Inman PTPR Trophy, which is based on a total progressive dairy program including breeding, feeding and management. Winners are determined by assigning point values to protein, butterfat, milk, classification, percentage records received and number of years on DHIR official test.

Cozy Nook Farm was also awarded the Protein Genetic Herd Award. This award is presented to the herd with the top genetic level in the past year based on Actual PTA protein of all cows with the same herd code calving within the past two years.

Both of these awards have four divisions, based on herd size. Cozy Nook falls into Group 3, milking 50-99 cows. Since 2014, Cozy Nook Farms has won the Ira Inman PTPR Trophy three times, the Protein Genetic Herd Award six times and the Progressive Genetic Herd Award once.

According to Tom, he realized in the early 1980s that protein numbers are very important to maintaining a profitable farm. He also knew that Brown Swiss cattle are the best at producing high numbers of protein, which was his main reason for owning and breeding Brown Swiss cattle. Tom’s advice to others is to “have a goal and keep striving for it.” While he focuses on genetics, he says he always remembers his main goal, which is to breed for longevity.