Raising replacement heifers represents a significant investment, accounting for roughly 15–20% of expenses on the farm. The replacement heifer represents the future of the dairy herd; however, many times, when milk prices are low, producers are tempted to cut costs on replacement heifers. Several factors play into successful heifer rearing, but special attention to high-quality nutrition and management is essential. Cutting corners can decrease growth efficiency and impact the amount of milk produced during first lactation.

It is also important to note that raising more heifers than needed as replacements on the farm adds extra costs and can also compromise growth and future production. Carrying extra heifer inventory not only adds costs, but overstocking heifers at any of the growth phases mentioned above can also compromise growth and efficiency, which directly correlates to first-lactation production performance.

Benchmarking heifer growth is one way to track growth efficiency on-farm and ensure that your heifer growth goals are being met. Due to differences in genetics, it is important to determine the mature body weight (MBW) of your cows in order to benchmark heifer growth on your individual farm — for example, using MBW to determine heifer body weight benchmarks, as is shown below in Figure 1. This allows your farm to set growth goals for the replacement heifers to reach breeding and calving at the optimal time for your farm instead of using data from industry averages or neighboring farms.

The MBW of your herd can be determined by weighing a group of third- or fourth-lactation cows that are between 80 to 120 days in milk. These should not be cull cows that are over- or underconditioned, as the MBW will be used to benchmark heifer growth goals. Heifers should be at 85% MBW post-calving. In order to properly benchmark growth, heifers should be weighed, at a minimum, at the following times: 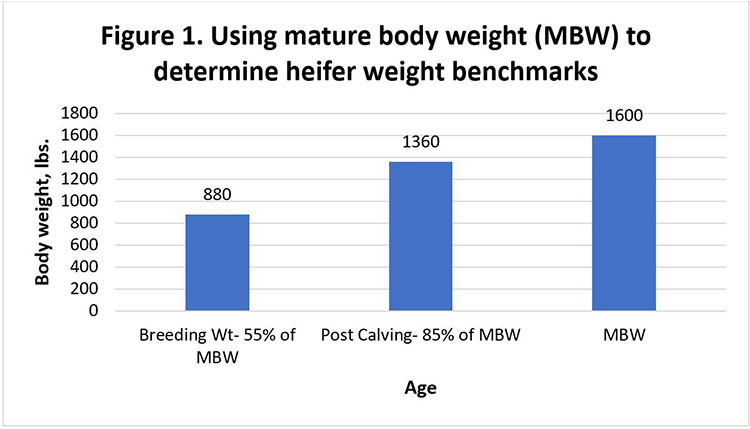 Outlined below are additional management and nutrition strategies to increase the likelihood of success during each of the growth phases of the heifer.

During this phase, nutrition, grouping and management are very important. When grouping calves post-weaning, smaller groups of 5 to 15 calves are ideal. Facilities should offer a minimum of 40 to 45 cubic feet per animal. Larger groups of calves can work with good management and herdsmanship. Pen changes are stressful, and calves should be grouped with other calves of similar size. Calves that were poor doers during the pre-weaning phase will not do well with larger, more dominant calves of the same age.

Dry matter intake is very important as calves are experiencing stress from pen moves and ration changes. There should be adequate bunk space for each calf, as well as access to fresh water, and each of these should be easy to find and access. In order to maintain sufficient dry matter intake, fermented feeds should be kept to a minimum, if offered at all. Although the calf’s digestive system can digest fermented feeds, these are higher in moisture, leaving many calves unable to eat enough to achieve an adequate level of dry matter. A grain mix, along with hay, or a TMR containing concentrates and dry forages, are options at this stage. If a TMR is fed, it must be well-mixed to minimize sorting. The feed must also be pushed up regularly in order to reduce slug feeding, which happens when calves consume the majority of their feed in a matter of a few hours, negatively impacting their digestive health and potentially leading to decreased feed efficiency.

Calves can be transitioned into larger groups at this stage. Once again, calves should be grouped with other calves of similar size, and facilities should not be overstocked. At this age, calves can transition onto a higher-forage diet and be introduced to fermented feeds. Achieving adequate dry matter intake is also still very important, so fermented feeds should not make up the majority of the ration quite yet. If it is not feasible to have a TMR for this group on your farm, a grain mix and hay also work well. The ration should provide a balance of protein and energy, allowing the calves to meet the individual farm’s growth goals for breeding without over- or under-conditioning the animals.

6 months of age to breeding

At this stage, fermented feeds can make up the bulk of the ration, and the grain content can be decreased. The nutrient consistency of the ration should be targeted in order to maximize heifer growth without leading to over-conditioning. Heifers should receive fresh feed daily. That feed should be pushed up regularly, as slug feeding can still be learned by heifers at this age and can become an issue as heifers enter the lactating herd. Overcrowding should also be avoided, as this can lead to inconsistent intakes between heifers and cause differences in size at breeding.

More recent research has also suggested that more emphasis should be put on objective criteria such as body weight at breeding. By benchmarking heifer growth and determining the MBW of the herd, the optimal body weight at breeding can be determined for your farm. Heifers that were poor doers early on may be of age to be bred to calve between 22 to 24 months, but their size can lag. Breeding these heifers before reaching 55% MBW can result in decreased first-lactation potential, as these heifers are still partitioning nutrients toward their own growth.

At this stage, heifers can continue to receive rations made up primarily of fermented feeds. Consistent heifer growth is still key, and rations should be adjusted routinely for seasonal and environmental changes. The majority of heifer growth, weight gain and structural growth occurs during the first twelve months of life. After the heifer becomes pregnant, she begins to partition nutrients differently, and fewer nutrients become available for structural growth. Trying to add structural growth at this stage often results in over-conditioned heifers, leading to calving and metabolic issues later on. As heifers approach calving, the level of metabolizable protein in the ration becomes important for colostrum production and future lactation performance. Overcrowding pregnant heifers should also be avoided to allow heifers adequate bunk space and reduce competition at the bunk. As heifers approach calving, facilities should dictate future pen moves and grouping strategies.

Dairy Farmers Invited: Webinar Highlighting the Good News for Dairy in the Dietary Guidelines for Americans