Limiting the new stressors that come with calving help our cows thrive. 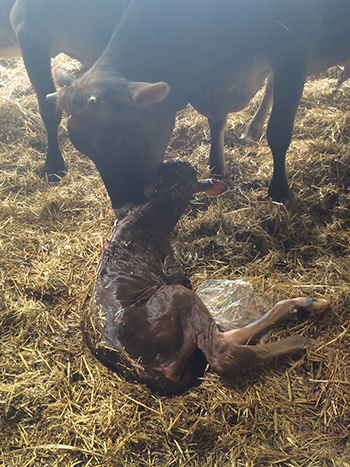 We all know how important the transition period is for cows. To be clear, I’m talking about the weeks surrounding when a cow calves. Their bodies, hormones, and stress levels are and will be changing drastically, and the best way to help them through it is to prevent as many complications as you can.

I know, I know . . . all the experts have talked about this and who am I to weigh in? Well, I’m a dairy farmer who, over the years, has made several changes that have truly made a difference in our herd. Before the haters come at me, these are practices that we’ve put in place on our farm that have helped us. That doesn’t mean they’ll work for everyone, but they worked and are still working for us, so I thought I’d share in case they help you, too.

Let’s talk about heifers first. The biggest improvement came when we separated our 2-year-olds from the mature cows. Not having to fight the big cows for bunk space and lying time helps them produce more milk and mature faster. We made that change almost 20 years ago, shortly after we built the milk barn.

A more recent improvement started accidentally. We mixed up some paperwork and brought a small group of heifers to the milk barn two weeks too soon, and it changed things forever. Think about it: they’ve never had a calf before, and shortly after they do, they’ll find themselves in an environment they’ve never been in. At the end of each month, we load up all the 2-year-olds due in the next month and drop them directly into our 2-year-old milking group. We don’t run them through the parlor, but they do go right into the crowd area. By the time they calve, we’ve taken away the stress of a new diet, a new place, and new cows. It makes for much calmer fresh heifers.

We also bring cows due to calve within two weeks to the milk barn and put them into a prefresh group. I’ll admit, I’m not 100% sure if this is true, but we’ve always lived under the assumption that it takes a cow’s rumen three weeks to adjust to a new diet. True or not, it’s a big part of the reason we bring cows to the milk barn early. When we do, they get fed the same TMR as the rest of the milking herd. If the above fact is true, by the time they calve, their body is used to the new ration and they hit the ground running as far as milk production goes.

I get it, maybe these tips aren’t an option for you. There are always obstacles — facilities, equipment, or money. But sometimes, hearing what helps others makes me think. Maybe exactly what they do won’t or can’t work for us, but it may lead us to a solution that will. Never dismiss what works for someone else; someday, it might work for you.