Newcomers to the showring

Our family’s next generation is getting their start at the county fair dairy show. 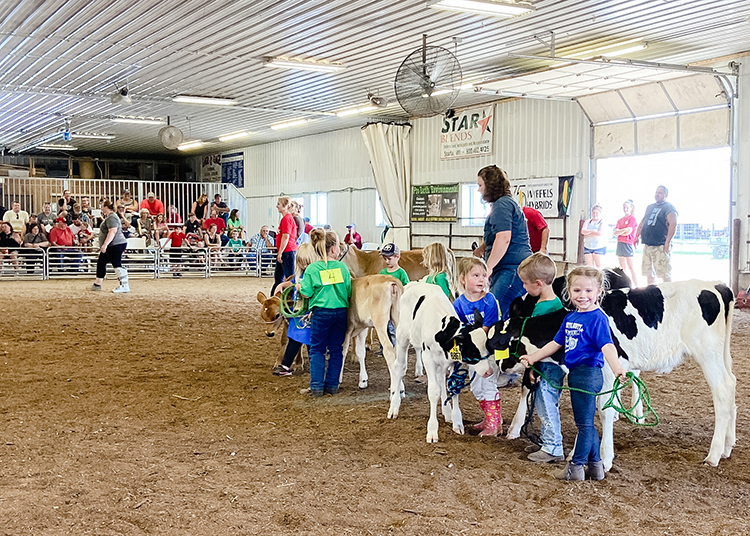 Chloe (3) smiles big as she shows a calf for the first time at the county fair.

Our county fair, the Fayette County Fair in Northeast Iowa, was held a few weeks ago. While I haven’t participated as an exhibitor for a number of years, I’ve been fortunate to witness the next generation of our family begin to experience the same fun and lesson-filled summer days as I did growing up.

My two oldest nephews, Wyatt and Caleb, have shown in the kiddie calf dairy show for a couple years. This show is for kids as young as 3 years old to show dairy calves since they are too young to be in the 4-H and FFA show. At ages 8 and 5, my nephews were each prepared to pick out, train, and show a calf again this summer. They both spend a lot of time on our family farm, so it seemed only natural that they participate in this staple summer activity.

Enter my free-spirited, outgoing, and very confident 3-year-old niece, Chloe. Living about 3 hours away from our farm, Chloe has far less experience with cattle than my two nephews. But when we brought up the idea that she could show a calf, too, she was thrilled. She had no idea what a county fair entailed, let alone a calf show, but she was all in.

My nephews worked with their calves regularly leading up to fair to halter train them and get them familiar with being led. Since the three kids were all going to be in different age groups, and Chloe wasn’t around to work with her own calf, we decided she and Wyatt could show the same calf this year. 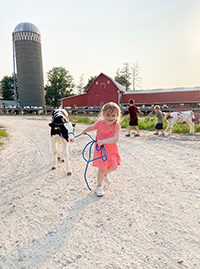 Chloe (3) leads her fair calf, named Ellie, by herself for the first time. Her older cousins are close by to lend a hand.
The night before the show, my sister and Chloe arrived at the farm. She was so excited to meet her calf and learn all about showing. Prior to this, it had taken my sister many tries to convince Chloe that she was not going to be riding her calf but instead would be leading it like she would her dog.

My nephews took it upon themselves to teach Chloe everything they knew (despite having limited knowledge themselves). They showed her how to hold the halter and guided her until she was leading her calf all by herself. The next morning, everyone worked together to wash the calves, get the kids ready to go, and make it up to the fair in time for the show. 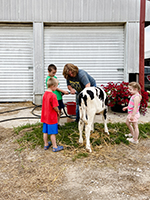 Wyatt (8), Caleb (5), and Chloe (3) wash one of their fair calves with the help of Grandma Connie.
We arrived, unloaded the calves, signed in the kids, got their t-shirts, and waited for their big moment that would happen during the lunch break of the open dairy show. Chloe, being in the youngest age division, was the first to show and she ended up being the first kid to enter the ring. Luckily, she was excited and confident when my sister told her she would get to be the line leader (which is apparently a huge honor at her daycare).

My family stood along the showring gates nervously and proudly watching each age division as Chloe, Caleb, and Wyatt had their moment to show their calf. They each spoke into the microphone the dairy princesses held for them and then proceeded to answer some basic questions from the judge before lining up in the middle of the showring.

After they all were done showing, we breathed a sigh of relief that their calves behaved and they each made it through the experience with a smile. We ended the day with free ice cream cones from the county dairy promotion stand, and they each got a prize for participating. 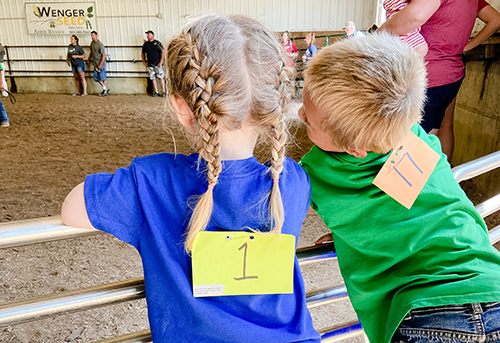 Chloe (3) and Caleb (5) watch from ringside as Wyatt (8) shows his calf in the Kiddie Calf Show at the county fair.

The kids came away from the experience with new knowledge. Chloe obviously learned how to show a calf, while Wyatt and Caleb learned the value, satisfaction, and pride of sharing their knowledge with others.