Hollywood could be the missing link for the agriculture industry to reach bigger audiences. In 2020, the Oscar winner for Best Lead Actor stood on stage and gave his acceptance speech. The movie he won the award for was a favorite of mine that year and I was excited to hear his speech. He expressed gratitude and explained that he felt lucky he had an opportunity to be a voice for some issues he felt passionate about.

I was taken aback at what he said next. As 10.4 million people watched, he explained, “Many of us are guilty of an egocentric world view, and we believe that we’re the center of the universe. We go into the natural world and we plunder it for its resources. We feel entitled to artificially inseminate a cow and steal her baby, even though her cries of anguish are unmistakable. Then we take her milk that’s intended for her calf and we put it in our coffee and our cereal.”

Almost two years later, imagine my surprise when I am watching my guilty pleasure, “The Bachelorette,” and I see a familiar scene — a dairy farm. Michelle Young, the current bachelorette, is from a suburb of Minneapolis and for her hometown date the show featured the Miron Family Farm in Hugo, Minn. 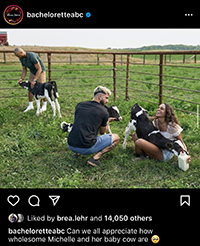 The Bachelorette is the number one watched show of college-educated women aged 18 to 29 and has an average viewership of 3.7 million. This opportunity gave the dairy industry in Minnesota a global stage to speak on. In addition to being featured in two episodes, the show also posted photos of the contestants’ experience on their social media.

The visit was set up by Prior to the Plate AgriTours LLC, a company founded on giving people the opportunity to visit farms and connect with farmers. The producers of the show reached out, expressing interest in filming on a dairy farm. After working with Midwest Dairy, they landed at the Miron Family Farm for its picturesque location. 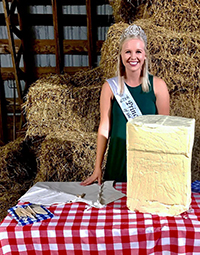 During the episode, the guys are shown getting “down and dirty.” They milked a cow, fed some calves, churned butter, and even shoveled manure. The contestants also competed in the Minnesota tradition of butter carving with Minnesota’s own 67th Princess Kay of the Milky Way, Brenna Connelly, serving as the judge.

The founder of Prior to the Plate AgriTours LLC, Heather Coffelt, noted that although most farms do not milk cows by hand or churn their own butter, it was still a huge win that the show chose to showcase agriculture. She was extremely grateful to ABC/Warner Brothers and the show’s producers for including agriculture in the season. 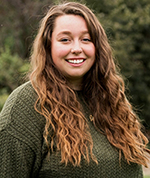 The author is the Hoard's Dairyman digital marketing manager and is responsible for the website, e-newsletters, social media, and programmatic. A graduate of the University of Minnesota - Twin Cities in journalism and photography, she grew up in Southeastern Wisconsin on her family's beef farm. In 2019, Michaela served as the Hay and Forage Grower editorial intern.