Whey protein is both a dairy by-product and valuable nutrition tool. 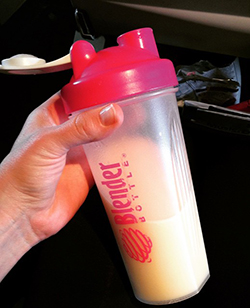 I am a lifelong athlete. I come by it naturally; everyone in my family has played various sports over the years. And, I would even say being raised on a dairy farm gave me some of my best training. We can all agree that working the dry cow pasture is the perfect place for improving quick lateral movements! I’ve always had plenty of milk in my diet, too. I recall many bowls of cereal to refuel after late night games.

It’s now January in a new year, and the motivation is strong for many people to change their diets and improve their physical fitness, among other resolutions. This brings to mind an opportunity that I feel we have been missing in the dairy industry: connecting the dots between whey protein and its dairy origin.

It was a few years ago that I realized how large the gap was in the perception of how dairy fits into a ‘clean’ diet in the fitness community. I have learned that I perform best when I have a clear finish line, so after having my first son, I decided that I needed to set my sights on an event or date to hold myself accountable to get back to a body composition that I preferred. I chose a figure competition, found a trainer to design my workout and nutrition strategy, and dove right in.

My trainer was very well-respected and nationally known, not only as a trainer but also as a champion bodybuilding competitor himself. Admittedly, he was not a registered dietitian, so I knew that his nutrition advice was coming from his own trial and error in addition to other influences. I felt I had a good understanding of nutrition and performance, and after seeing the diet plan, I decided it was pretty nutrient dense and balanced. What surprised me, though, was our conversation regarding it. There were 6 meals, with 3 of those consisting of whey protein shakes. However, he mentioned that dairy was intentionally excluded from the plan.

Yes, you read that right. Half of the diet’s meals were whey protein, yet he did not view them as dairy. I questioned him on this, and he explained that he meant ‘traditional’ dairy was not in the plan.

Without milk, and without ‘traditional’ dairy, the whey protein industry (which started the protein shake industry and still makes up the majority of it) would cease to exist. Yet, in discussions with those both in the fitness industry and outside of it, that connection, which I wrongly assumed was obvious, is not apparent.

Protein shake ads are sexy — abs on display, with clothing often minimal to show off a lean physique. Milk ads are wholesome — kids pouring their own glass and families full of smiles. Ironically, though, the largest purchasers of each are the same people: mothers with children in the home! As a young mother myself, I want to be both: a fit, healthy mom and also a caretaker who nourishes her children. Those goals do not conflict.

I don’t know exactly how we can bridge the gap between whey protein and its ‘old school’ or ‘traditional’ milk origin, but I think there is a tremendous opportunity here that we in the dairy industry are missing. Consumer education is what’s needed, but doing that in a way that people actually care to learn and listen to is the tricky part. Food for thought!