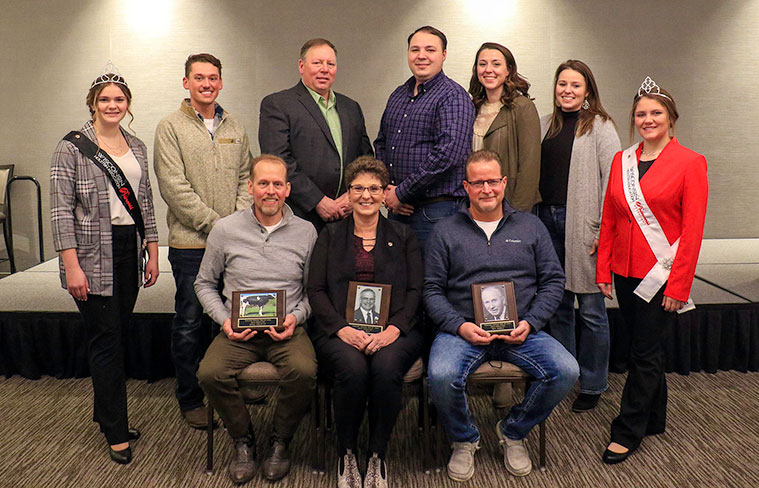 The Jefferson County Holstein Breeders, in coordination with the Wisconsin Holstein Association (WHA), hosted the annual Adult Holstein Convention at the Country Inn & Suites in Fort Atkinson, February 18 and 19. Holstein breeders from across the state were in attendance for meetings, speakers and tours, and to receive recognition for outstanding accomplishments in 2021.

Also recognized were owners of cows that have produced more than 300,000 and 400,000 pounds of lifetime milk. There were 57 cows recognized for producing over 300,000 pounds and four cows that produced over 400,000 pounds in 2021. Outstanding advertisements in the Wisconsin Holstein News in 2021 were also recognized. Taking top ad honors for the year was Chris-Le Acres, the Kramer family of St. Cloud.

Attendees at Saturday morning’s early bird session heard about diversification on the farm from fellow association members, Marci Walker, Zoey (Brooks) Nelson and Gail Klinkner. Each woman, in addition to farming, operates a business that promotes products made from their agricultural business. Walker’s family runs Walk-Era Wagyu Beef where they sell beef cuts as well as quarters, half and whole animals from Wagyu-Holstein cross steers bred on their farm. Nelson, along with her father, milks 600 Holsteins and has just started selling beef from their Holstein steers in their retail store. They are also working with a local creamery to produce a line of white cheddar cheese. Klinkner operates Klinkner Kountry Store where the family sells beef and pork from their animals, local cheeses and country décor. Attendees greatly enjoyed the session and learned a lot from their fellow members.

The annual WHA business meeting was held and included committee reports from board members. Four new members were elected to a three-year term on the WHA Board of Directors: Nicole Miller-Speich, Orfordville; Ty Hildebrandt, Hustisford; Ralph Petersheim, Viroqua and Krista Luedkte, Hortonville. Ryan Weigel of Platteville was re-elected to a second three-year term.

The Dibbles had a solid show career too with one of Ben’s proudest moments when Dibble Crescent Model was named the Grand Champion Bull at Waterloo in 1958. He exhibited for the first time at the Wisconsin State Fair in 1931 with 50 more years of Dibbles showing at that same event.

Dibble farmed during an era that preceded herd-mate comparisons, predicted difference, cow indexes and genomics. He strived for success through promoting his bloodlines through breed magazines, testing, classifying and showing at all levels of competition. As chairman of the Special Youth Committee of HFAA, Dibble pushed for a Junior All-American program that became a reality in 1951.

John Selz of Selz Farm, Humbird is the second person to be inducted into the Wall of Fame this year. John and his wife Marianne returned to his home farm near Humbird to farm with his brother Bill in 1959. John had a chemical engineering degree from the University of Wisconsin and had worked two years for Dupont before this point.

John was proud of his herd and showing his cows to anyone who stopped over and no matter who you were, you were treated with respect. He served on over 200 boards, committees or advisory councils. His time on the National Holstein Board of Directors and President of Holstein USA made the most impact for the industry. He was the chairman of the Holstein ad hoc identification committee that developed National Animal ID, developed the alternative to photo/sketch for permanent ID, and developed the plan for grading up of all Holsteins to registry status.

The Selz herd received many awards including over 40 Progressive Breeder Awards, 50 Gold Medal dams, the first Dam of Merit, bred over 100 Excellent cows and had three cows that produced over 50,000 pounds of milk. The herd also sold bulls, cows, and embryos around the world.

This year’s Wall of Fame bull was awarded to the Opsal family of Blue Mounds for Opsal Finley. Troy Opsal has built a herd through strategic breeding and this translated into Opsal Finley. His story began when Troy bought a bred heifer, Twin-B-Dairy E-B Felisse-ET, in 1994 on the Agriprize Protein Profiles sale. She was a How-El-Acres K Bellman from a VG-88 To-Mar Blackstar daughter of one of the premier genetic brood cows of that time, Rocky-Vu Rotate Exctasy Ebony EX-94. The purchase was made and included with it was a package of three embryos of Felisse x Bayville Ethan.

The three embryos out of Felisse were implanted with one resulting in De-Su Opsal Ethan Fiona. A flush of Shen-Val LM Formation on Fiona resulted in three bulls, one being Opsal Finley who was chosen by Jay Jauquet to go to Alta Genetics.

Of the 10,220 daughters scored in 3,893 herds, the highest scored daughter was at Opsal’s farm, Opsal Finley Sage-ET EX-94. There have been 131 Excellent and 958 Very Good daughters of Finley to date. He was named a Gold Medal Sire in January 2008, making him the sixth generation to achieve Gold Medal status. Finley was known for making cows with great rumps and fore udders. His legacy continues on through his daughters and their sons, with popular sires like Pine-Tree Sid’s and Val-Bisson Doorman showing Finley in their pedigrees.

This year’s Wall of Fame Cow was Fobes Mechthilde Ollie, known as Phoebe to her owners John and Katheryn Bartlett of Oshkosh.

In 1945 the Bartletts bought three bred heifers from master breeder Louis Wiese of Neenah. One of these was Phoebe. Her sire was Admiral Joe Creater a grandson of Northstar Joe Homestead. Her dam was Mertilde Fobes Ormsby Johanna VG, an Ormsby-bred cow.

Phoebe scored EX-91 as a 12-year-old. She lived to be 21.5 years of age. Eighty percent of the Bartlett herd were direct descendants of Phoebe and her sister Beverley. Phoebe produced 264,000 pounds of milk, 3.6% and 9930 pounds of fat in her lifetime and had 16 calves. She was the first Gold Medal Dam with over 200,000 pounds of milk. Her daughters also had impressive records with many producing over 100,000 pounds of milk. Katheryn Bartlett’s herd was known for its high producing and long-lasting cows.

The afternoon was highlighted with tours of local businesses in Fort Atkinson. Tour attendees visited the Hoard’s Dairyman Farm to see their robotic milking facility. Another tour stop was Jones Dairy Farm, a sausage making company. Attendees got a tour of their market store and the old farmstead where the Jones family used to dairy farm. The tours wrapped up at the National Dairy Shrine which is always an enjoyable walk down memory lane for Holstein breeders. 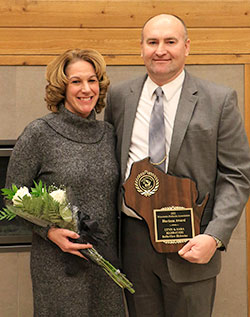 Lynn and Sara Harbaugh
The Holstein Horizon is a new award that recognizes those in the industry who are still involved in breeding outstanding Holsteins but may not, or no longer, be milking cows. The first Holstein Horizon was awarded to Lynn and Sara Harbaugh of Marion. Lynn works as an area sales manager for CentralStar Cooperative and Sara as a territory business manager for Zoetis. Together they run a successful show heifer operation with their kids, Jacob, 16, Logan, 14, and Madison, 11.

They have a unique partnership with Kurt and Sarah Loehr of Forest Ridge Holsteins. They own roughly 50 head at Forest Ridge and they're constantly working at improving genetics under the Bella-Ridge prefix. 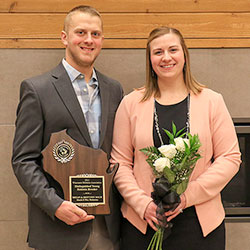 Bryan and Brittney have four children who are also very interested in the farm lifestyle. Natalie is 11, Braxton is nine, Jayden is six, and Rayah and Rori, the twins, are four. Natalie is all about showing and knowing each of the cows and all of the kids are active in all aspects of the farm.

In addition to getting the herd registered, the couple has a strong passion for cow families and started buying into deep pedigreed cows to continue to improve the herd. One key investment was Luck-E Talent Kiki EX-93. There are a number of daughters and granddaughters in the herd today including special show heifers, Mauk-E-Way Ammo Kyler and Mauk-E-Way Jordy Knox, who were Reserve Junior All-American Spring Yearling in 2020 and Honorable Mention All-American Fall Yearling in 2020, respectively.

The Chris and Courtney Booth family have been big supporters of the Mauks on their farming journey. The Booths and Mauks partnered on Rosedale Hopeless Romantic EX-90. This cow family produced their first national show winner, Ms Mauk-E-Way Rosa-Red.

As they continue to grow their herd, Bryan and Brittney have made improvements to the farm including purchasing a new TMR mixer and installing water beds for the cows. Additionally, they continue to breed animals that excel at home and in the showring. 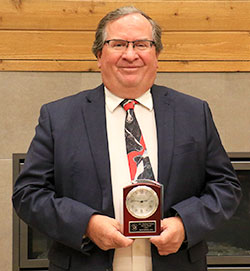 Ron Sersland
The Marlowe Nelson Distinguished Service Award was awarded to Ron Sersland, owner and CEO of International Protein Sires. Ron was raised on a dairy and hog farm in Iowa and attended Iowa State University. Following graduation, he started working in the AI industry and pursuing his goal of being an international businessman. He and his late wife, Sandy, started Our Help Inc. to assist those in other countries with quality products. Our Help Inc. purchased International Protein Sires in 1999 and is now owned by Ron and his wife Nellie.

Ron has traveled extensively outside of the U.S. developing and nurturing relationships with his international distributors and dairy producers. Ron has been a big supporter of Wisconsin Holstein, especially of the WHA All-Breeds Futurity.

The evening wrapped up with the announcement of the Distinguished Holstein Breeder, William (Bill) Schultz III of Lyn-Vale Holsteins. Bill grew up on his family’s grade Holstein farm near Waldo. He was introduced to registered cattle at this uncle Carl’s farm near Kewaskum. 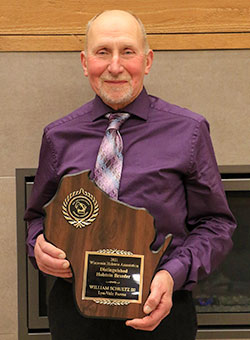 William Schultz III
His first venture into the registered business was when he bought two calves off of a sale at the Great Northern as show calves for his oldest daughters, Erika and Heather. A great-granddaughter from one of those first calves, Poplar-Bend CR Fran, was Lyn-Vale Leduc Stella EX-91. Stella was a show heifer of Bill’s youngest daughter, Mandy, and she turned into a successful show cow as well, earning a Junior All-American nomination.

Another notable cow family at Lyn-Vale was that of Lyn-Vale Jed Kristi EX-92. This family has made 76 offspring over the years with many in the herd today. Baycroft Rubens Glorious EX-91 is another cow that made a positive impact on the herd with over 70 females over the years tracing back to Glorious. Bill also has an interest in Red and White Holsteins and partnered with the team at Scenic-Edge Holsteins to build that part of the herd.

Bill’s breeding philosophy has been focused primarily on type with emphasis on udders and feet and legs, plus linear traits, calving ease, and some health traits. Today, the herd of 82 cows is milked twice a day. Their rolling herd average is 24,590 pounds of milk, with 4.1% fat and 3.2% protein. The herd’s unofficial BAA is 111.2 and includes 31 Excellent cows, 44 Very Goods, and 6 Good Plus cows. Bill’s mating choices have resulted in 101 Excellent cows over the years.

Bill has developed an outstanding herd of cows and heifers from the ground up that can show at all levels of competition. He also enjoys seeing animals he bred do well for others, especially youth that have purchased heifers or partnered with him on projects.

The WHA Board of Directors met to elect officers for the upcoming year. Steve Endres of Waunakee will serve as president. Vice President will be Ryan Weigel, Platteville, and Erica Ullom of Bloomer will serve as secretary for a sixth year. Kurt Loehr and Sara Feldmann were also elected to serve on the Executive Committee.