It’s the most wonderful time of the year

Calving season cranks up while agricultural literacy events fill the calendar, too. 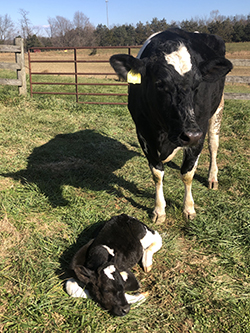 Ah, March; the one month in the year that is as unpredictable as a cow in heat. One minute it’s freezing, the next it’s sweltering hot, and this cycle of hot and cold continues with wind, rain, and snow for the full 31 days until April. Each day is a new one and as unpredictable as the last, and to top it all off, heifers are starting to calve while agriculture literacy weeks, agriculture awareness days, and other events are taking place all at the same time. This is the month where my schedule stays booked and filled down to the minute, but at the end of the month, it’ll be worth it.

At the farm, we breed cattle all year round. However, we experience what I like to call “calving spurts.” We typically have calving spurts March through May and August through October. The spring spurt is usually only heifers calving in, while the fall spurt is a pretty even mix of cows and heifers.

For those that have never had the pleasure of experiencing heifer calving season, let me explain to you about the most stressful, unpredictable, tiring, and patient time of the year. Heifers are not always the smartest creatures in the world. They usually don’t have a clue as to what is going on when they are calving, and half of the time, they look at the calf like it’s a foreign object that is going to kill them. Don’t get me wrong, some heifers calve and immediately care for their calves, but not always.

As March begins, we start visiting the maternity pasture at least three times a day. If a heifer goes into labor at night, we set our alarms and prepare to visit her until the calf is out. You never know when the calf is sideways, backwards, being stubborn, or if the heifer just doesn’t want to push.

Typically, we allow Mother Nature to step in and heifers to calve on their own to avoid traumatic experiences, but, just like the weather, Mother Nature isn’t always reliable. After the heifer calves, she and the calf get to be together for at least 24 hours, unless she abandons it. Then, she gets to come into the parlor, which is an adventure in and of itself. Half of the time, it takes three or four of us to push the heifer in the parlor and then someone has to avoid being kicked while milking. It’s always an interesting experience.

March is also the month that holds so many agricultural events that I end up squeezing in time to meet with agriculture classes throughout the county. It’s important to raise agricultural awareness and be an open book for others to use when curious about farming practices, meat, or other goods. March may be a crazy month, but knowing that our heifers are safe and that folks have resources to ask about agriculture makes it all worth the time.