Showmanship taught me my first lesson in parenting

Sometimes, you look great, and other times you just have to hold on. 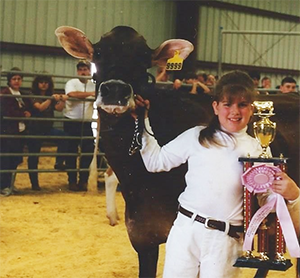 When our oldest child was two, he was generally compliant. He listened the first time, never unbuckled while in his car seat, and would taste anything you put on his plate. Many times, my husband and I quipped to each other that the “terrible twos” must surely be a misnomer. Then, our second child turned two . . . and quickly served us generous portions of humble pie!

As I reflect on this dichotomy, memories of my days competing in showmanship come to mind. I vividly remember one occasion with a heifer in heat mounting another heifer right outside the showmanship ring just as we were about to enter. The general public watching the show reacted with a bit of noise, and parents of showmen nearby scrambled to make sure everything was under control.

The heifer in heat was mine, and I did my best to regain composure as we entered the ring. The judge saw it — everyone saw it — so I gritted my teeth, forced a smile, and walked along. I don’t remember every detail of that show. But I do remember that one of my friends whom I often showed with was in the ring. He and I had competed many times, and I knew the old girl he had in the ring was his “showmanship cow.” She was easygoing and responsive on the halter; together they had won many belt buckles and trophies.

After a few circles, the judge motioned everyone to stop and made his way to me. He took my heifer’s halter and directed me to trade animals with my friend showing the aged cow across the ring. I took a sigh of relief when we switched. After I set the cow’s feet with little effort, I noticed my heifer across the ring was giving my friend a hard time. His face was red as he struggled to keep my heifer — and his frustrations — under control. Eventually, we traded back to our original animals and everyone lined up, waiting to be tapped for their final placement.

I don’t know if others in the class failed to have their animal’s feet set correctly, missed a cue from the judge, or forgot their animal’s sire, but I do know that their animals did not create the commotion that mine did. I fully expected to be in the bottom of the class.

When the judge took the microphone that day, he directly spoke to my experience. He acknowledged that my animal presented me with quite a bit of resistance before the competition had even started. And then, surprisingly, he walked over and tapped me first. He explained that how one handles adversity is where you really learn what they’re capable of in the showring. My friend had certainly spent years working with his cow and deserved the top spot, but this judge wanted to make a different point that day.