There are three factors that determine how large of a jump in genetic progress we can make from one generation to the next. We need reliable predicted transmitting ability (PTA), high selection intensity, and traits that have plenty of genetic variation.

Reliability depends on how much information we have from relatives, a cow’s own performance records, predictions from DNA marker information, and daughter performance records. Selection intensity is a measure of how picky we are when choosing sires and dams to produce the next generation. If we select from the top 1% of animals based on their genetic merit, we will make faster progress than if we select animals from the top 10%, for example.

Genetic variation is mostly out of our hands and is a function of the genes in a population. We can introduce new variation through crossbreeding to some degree and perhaps, someday, through gene editing and transgenic techniques. We can also reduce genetic variation with high levels of inbreeding, but we want more variation and not less.

That means we have one more factor to consider when evaluating genetic progress — the generation interval, which is simply the average age of parents when their offspring are born. The relationship among these four factors of genetic progress is shown in Figure 1.

As you can see, we want a low number for the generation interval, which indicates we are turning our generations over more rapidly.

The progeny test scheme in place before the introduction of genomic selection in 2009 was tremendously successful at generating highly reliable daughter proven PTA for bulls that had a large number of daughters. There was also high selection intensity with many daughters and sons generated by the very best bulls. We made impressive genetic progress because of progeny testing, particularly when viewed from the perspective of the amount of progress made per generation.

What was the one area where progeny testing fell short? Generation interval. Once a bull was born, we had to wait approximately one year before he was sexually mature and we could collect semen. Add another year to distribute semen to test herds, get cows pregnant, and for daughters to be born. Those daughters needed two years before they calved and began producing milk. It will be yet another year before enough daughters have completed a sufficient part of their lactation for us to project their producing ability. 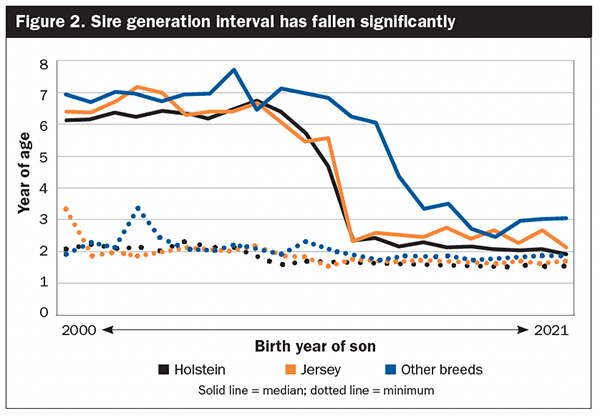 As you can see, the median was right around 6.5 years, regardless of breed, until 2009. That value dropped rapidly for Holsteins and Jerseys to 2.5 years by 2012 and then slowly declined to right around two years currently. That transition occurred somewhat more slowly for breeds that did not have genomic evaluations developed as early as Holsteins, Jerseys, and Brown Swiss.The median is simply the middle value from a given year, or the 50th percentile. It is very similar to the average but is less influenced by outliers, so it gives a better representation of the population.

Interestingly, there have been bulls with a generation interval of two years or less for the entire time frame presented. The difference is such bulls were used sparingly prior to 2009 and are now used almost exclusively to generate the next generation of bulls. It is becoming common to see sire generation intervals of 1.5 years.

Figure 3 demonstrates the interval from maternal grandsire to grandson. This chart represents two generations — from sire to daughter and daughter to son. For Holsteins, this declined from 10.5 years to four years. The typical cow was 4 years old when its A.I. son was born prior to 2009, and that age has now been cut to 2 years or less. 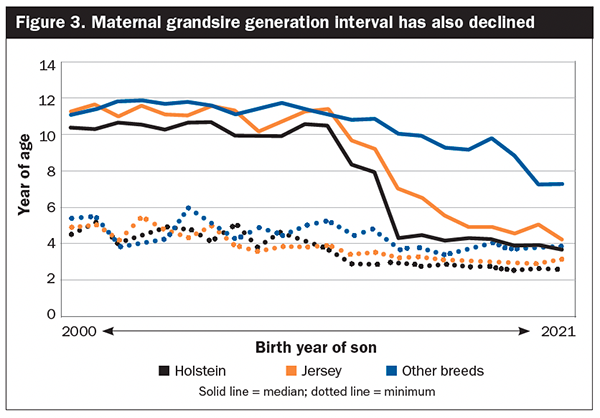 Likewise, the minimum time to turn over those two generations has declined from around five years to as little as two years and eight months. Most Holstein bulls are now offspring of virgin heifers. We see slightly higher values for Jerseys, and we can see the transition has been slower in the other breeds.

Genomic selection promised to accelerate the rate of genetic progress by reducing the generation interval. Clearly, that prediction has become a reality. The question now is: How much more can we reduce generation interval? Could we harvest eggs from newborn calves? What about a fetus? Is it possible to generate progeny using stem cells from embryos?

Whether those options ever become a reality remains to be seen, but you can bet that scientists are working toward those possibilities in order to capture the potential of extremely short generation intervals.

Lessons to learn from avian influenza
By Chad Dechow