We went back to all robots

Milking in both our parlor and with the robots provided some benefits, but certain costs recently led us back to milking exclusively with one system. 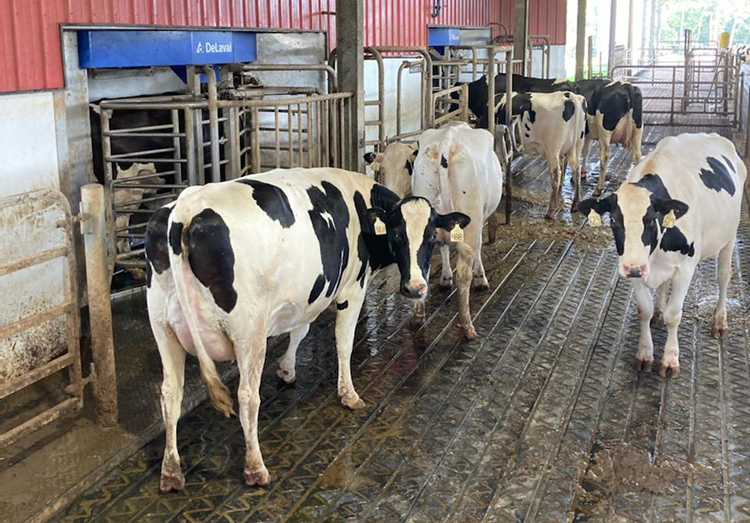 There are pros and cons to milking your entire herd with robots versus some in robots and some in a parlor. We have done it both ways, and we have seen plusses and minuses for our farm. This outcome will change from farm to farm. Many things can alter the pros and cons, like how many cows the farm has, the amount of available labor, milk production goals for early, mid, and late lactation cows, and the list goes on and on. I thought I’d share some of my thoughts on both scenarios for our farm.

When we first began milking with robots, we were completely new at everything. We jumped right in and milked the whole herd with only the robots. Several months later, we couldn’t decide if it was just the change that had pulled some of our later lactation cows down in milk production to the point where we were thinking of drying up some cows early. Or, perhaps it was because these cows weren’t “buying” their time in the robots. We had been a 3x parlor herd for many years, so seeing a cow only average 1.7 milkings in the robot at the very end of their lactation was a hard gulp to swallow. During this time, we went from 95 to 100 pounds per cow down to 85 pounds per day. We knew we would see some drop in production and anticipated it, but we weren’t exactly sure how much.

My father is a “bounce back” kind of guy. For instance, if we were averaging 98 pounds of milk per cow and production fell to 92 pounds per cow, he would spring into action. He would be calling every vet he knows, the nutritionist, and other farmers to figure out the rhyme and reason behind it and would be trying to fix it within 24 hours. Then, once we were back to 98 pounds, he would be calling our nutritionist within a week asking why we were still at 98 pounds and not at 100. I admire him for that.

So, with that being said, seeing this drop in production once we started milking in robots and holding steady there was making my father about ready to pull his hair out.

After some time, our family decided to open the parlor back up and milk the very late lactation cows there twice a day. It was a little bit more labor intensive, but over time, the overall herd average went back up to the mid-90s. Now the cows that were barely visiting the robots more than once daily were going into the parlor to be milked twice a day.

Things seemed to be great. The bossy, older, heavier bred cows that took up space just standing in front of the robots were gone, and the fetch list had shrunk significantly, which meant less labor. Technically, our labor was just transferred to the parlor, and there are also extra costs to run the parlor, such as electricity, maintenance, and cleaning chemicals. This, of course, all adds up. So, you could look at the move as a glass half full or a glass half empty situation.

After quite some time, we were milking great. The robot herd was around 95 pounds per cow for milk production and the parlor herd, cows in their last 30 days of lactation, was around 60 to 70 pounds. Unfortunately, because of the money it took to run the parlor and the amount of labor it required, we decided it might be more efficient for all the cows to be milked by the robots. So, last week we dried up some cows and put the rest back into the robot herd.

We have seen a little bit of a crash in milk production and robot visits per cow, but it is definitely not as bad as the first time. All the cows were already robot trained, and we had also done some oversight on the robots and figured out there were details like smart pulsation and teat cleaning effects that could save some robot time per cow. This made more robot time for the cows that were put back into the robot herd.

Since last week, we have fallen about 5 to 6 pounds per cow, and the number of visits per day has dropped around 0.3. Every day, though, we are slowing gaining back speed. I am honestly quite curious how this time around will compare to the first time we had all the cows in the robot barn. We have better robot-trained employees and all the cows are trained. I believe exciting and efficient times are ahead!